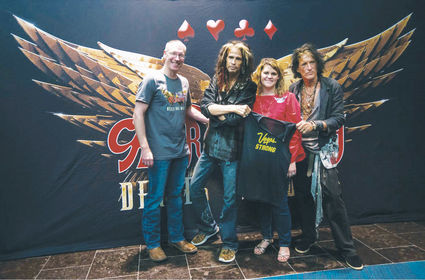 Kris Dahl, Steven Tyler, Barbie Dahl and Joe Perry (left to right) pose during a VIP meet-and-greet Oct. 8 where B. Dahl returned a memorabilia t-shirt she had caught at a concert a week earlier when Tyler threw it into the crowd. The t-shirt will be on display in the Aerosmith museum, backstage at Park Theater in Las Vegas, during the band's Deuces Are Wild run.

He gave her the shirt off his back. And she returned it.