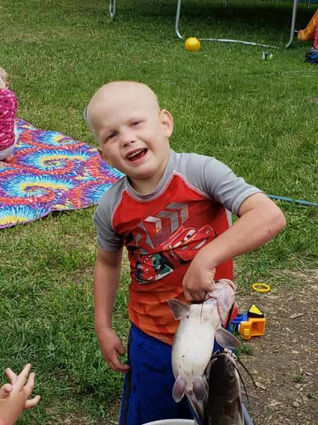 Though the anglers snagged the prizes, the true winners of the weekend were two children. Chancellor McKee, a Billings 18-month-old, and Jonathan Clark, a six-year-old from Glasgow, were the beneficiaries of the funds raised by the event. Both children are currently receiving treatment for cancer.

In January, after Jonathan had been to the doctor about five times in six weeks with swollen lymph nodes and what was thought to be a viral infection, Dawn, with a mother's instinct, knew something more was wrong with her son. She insisted on seeing Dr. Anne Mallard immediately. Mother and son left the clinic just before 5 p.m. on Jan. 28, after Dr. Mallard collected samples to run blood work.

Dawn recalls, "She told me, 'I think he has leukemia.' I just lost it." The family tried to enjoy dinner together before what was to become an extended stay in Colorado.

"We flew to Denver that night. They started blood transfusions to get him healthy enough for treatment," she remembers. He was released from the hospital at the end of that week, but their time there was not over. They spent another four to five weeks in the Denver-Aurora area.

"I thought, it was just a family thing. We'll deal with it," said Clark, describing her initial reaction to learning the boy had been diagnosed with leukemia. And they did deal with it as a family. They just didn't realize how large their "family" actually is.

Local fundraisers were held. Friends and coworkers stepped in to help. Clark tells the Courier, "I had friends reach out, asking why I hadn't told them. 'We are friends, but we are also family.' The support spread like wildfire."

In addition to his Colorado stays, Jonathan has had treatments in Billings, requiring a multi-week stay there also. "The cost just for the stay is more than my husband brings home each month before taxes," explained Clark of the costs beyond health care. Jonathan is now in remission, though he will still need to travel to Billings for a few years for continued chemotherapy treatments to prevent a relapse.

And that is where Fishin' for the Cure really comes into the Clark's lives. The funds donated to the family will go towards travel expenses as Jonathan continues his medical care. As of press time, totals had not been determined however every little bit will help.

Jane Jarvis, who took over running the tournament from the founder's family, is a former co-worker of Dawn's. Jarvis messaged Dawn via Facebook for their permission to sponsor Jonathan at the event. Jarvis was delighted to have the Clarks be a part of this year's tournament, as were the participants, "When we introduced Jonathan, he got the biggest applause," she exclaimed.

"We are extremely grateful and overwhelmed by the community's support," said Clark. Jarvis is also thankful to everyone involved in the tournament, "The people who come know it's for a good cause."

Jarvis is proud of this year's event, saying there were more boats and more money raised than last year. She extended a special thank you to the Plentywood chapter of Walleyes Unlimited and to Wade and Scott Garrett. "If not for them bringing in donations, the tournament wouldn't be as successful as it is."

September is Childhood Cancer Awareness month and FFTC has partnered with Solving Kids' Cancer for the Lace Up for Kids social media campaign. Fishin' for the Cure will provide free gold shoe laces to individuals or teams who are interested in raising awareness for the cause. Please contact Jane Jarvis at 406-989-1256 or 406-485-2618.

Fishin' for the Cure Results