Brings Over an Inch to Glasgow, Over Seven in Little Rockies 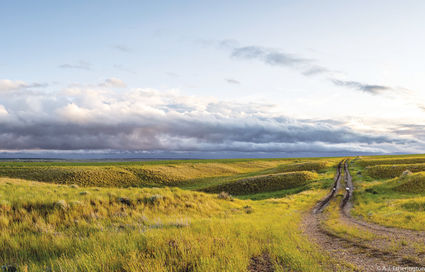 One arm of the "Closed Low" cyclonic weather system rotates around to dump more rain on an already wet two-track road.

Dark clouds, heavy rain and fast winds made for a cold and wet first weekend of summer as a "Closed Low" weather system settled in over Northeast Montana on Friday, June 21. The system was characterized by the National Weather Service as a low pressure system with a cyclonic center. Closed lows are detached from the main westerly current of the jet stream and move slowly, dumping moisture over areas for sustained periods of time.

Closed lows form with a perfect storm of weather events and in Montana they occur about once or twice a year. The first ingredient is the jet stream passing over the area quickly, causing a vacuum in lower layers of the atmosphere. That vacuum is then filled by moisture on the ground that rises slowly to fill the void. The moisture then releases energy, forms clouds and begins to release. Due to the fact that the moisture filled a vacuum of air, there is little movement produced by the jet stream to move the storm and it stalls in place or moves slowly until it is either pushed out by a stronger system or loses all its moisture. According to Meteorologist at the National Weather Service Grant Hicks, the cyclonic center is caused by the Earth's rotation, which in the Northern Hemisphere turns clouds counter-clockwise.

Hicks states the system brought rains ranging from half an inch to over seven inches to the region with the high-end falling in Zortman (7.31 inches) and much of the Little Rocky Mountains. It also carried with it sustained winds of over 30 mph with gusts as high as 53 mph – like the ones that occurred in Malta on June 21.

The variation in moistures from one area to the next was caused by geography. Hicks described the scenario as Orographic lift, which is when air is lifted by the mountains higher into the atmosphere. That lift condenses moisture more quickly than flatter terrain and causes moisture to fall more rapidly.

"7.31 inches is quite the amount," commented Hicks adding that some areas in and around the Little Rockies saw flooding and a few roads were reported washed out. Valley County saw less rainfall averaging just over an inch in most areas. What Hicks did point out is that this event brought the total precipitation for this same time period up 400 to 600 percent higher than normal.

Thick rains obscure Tiger Butte between Nashua and Glasgow, Mont. last Friday, June 21. The rains were part of a "Closed Low" weather system that settled in over the area bringing with it heavy rains that dumped over an inch in less than 48 hours in Glasgow and over 7 inches in the Little Rocky Mountains south of Malta.

"Before the event we were looking at drought conditions," stated Hicks. "Especially, in Daniels, Sheridan and Roosevelt counties. The single rain event seems to have reversed course, according to Hicks. "We are expecting a massive green up across the area in the next two to three weeks." He added that prior to the event they were receiving reports from farmers and ranchers of fields browning in the dry conditions.

As one local business owner described it to me, "That's a million dollar rain right there," indicating the value the rainfall would have to the local economy and especially the agriculture sector in Northeast Montana.

As for the forecast, at press time, a little rain and some storms are expected in the next week, with the main system expecting to occur on Thursday when a possible severe thunderstorm – a completely different rain event – could move into the area.

For that Hicks offered up the following advice, "Stay dry, keep away from thunder and stay off muddy roads, 'cause you don't want to get stuck."