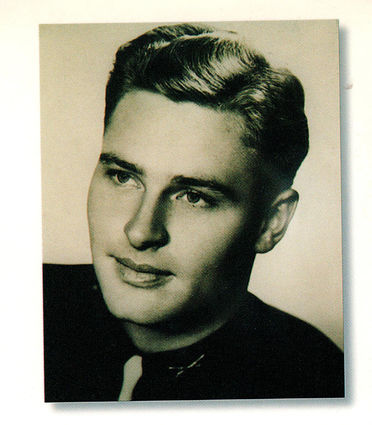 Jack M. Anderson passed away January 2019 with his family by his side. He joined his beloved wife, Betty, Jan. 19 at the resting place they had chosen in western Washington.

Jack was born at a homestead near Saco, Mont., in the spring of 1923. Home was his mother's homestead near the junction of Square Creek and Timber Creek in south Valley County. His mother, Josephine Goldman, filed on the homestead in 1918 and married Jack's father, McKee, later that day. McKee had patented his homestead near Saco and lost it to the bank. He kept borrowing money to put in wheat crops, which failed due to drought, hail, or grasshoppers. McKee declared never again and turned to cattle ranching. He built a three-room log home which served the family until 1982. Jack attended the Lone Pine boarding school with his older brother, Bill. Jack said that if there was a blizzard at the end of the school week, they just let their horses head home and when the horses stopped, they knew they were at the horse pasture gate southeast of the ranch house.

The family moved to Glasgow, Mont., when brother Bill started high school. There Jack enlisted in Co. G 163rd infantry at age 15 and graduated from Glasgow High School at age 16. While in high school, Jack became a Christian. Jack said this faith helped him through life many times. Four months after graduation, Jack was inducted into federal service and trained in Fort Lewis Washington until deployed in 1942.

By this time, Jack's parents and two younger sisters had moved to Washington and left Bill on the ranch. Jack became engaged to Betty Hallock just before deployment. Her parents were family friends, who had homesteaded in the Larb Hills and left the area before Jack was born.

Jack wrote Warrior by Choice (WWII) by Chance (Korea) about his war experiences. He was a member of the 163rd infantry Co. G, which our Memorial Highway (US 2) west of Glasgow honors. After 44 days in the New Guinea jungle in early 1943, only two officers and 36 men remained of four officers and 186 men in the 163rd. Before returning stateside, Jack was sent to Hiroshima after the bomb was dropped. Home again, Jack and Betty married. Jack was discharged and re-enlisted.

He served in Korea and was badly wounded and taken prisoner by the Chinese. Seventy to 80 men were captured then. Only Jack and two others, who helped him back to American lines, survived. On the day Jack was put on a flight to a US hospital, Jack and Betty's second son was born. At one time, the military tried to collect the Army wages Jack earned while he was underage. A Washington Senator helped him out of that. Jack served nearly 25 years in the Army.

Jack was a firefighter for 15 years after his Army service. He taught archery, rifle and pistol marksmanship, and safety He also served in Boy Scouts and the Parent Teachers Association. When he came to eastern Montana to visit family, Jack always stopped to see friends from the 163rd.

Jack and his wife, Betty, are remembered with love by three children, nieces and a nephew, and their families.