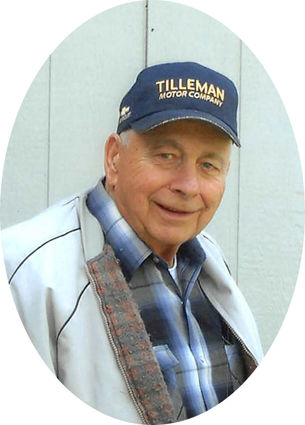 Don was born June 13, 1933, in Malta, Mont., to Louis and Mabel (Homeier) Plouffe. He was raised and educated in the East Strater Community and helped on the family farm.

Don was working on a seismograph crew when he met his best friend and lifetime love, Nellie McNamara. Don was united in marriage to Nellie on Nov. 1, 1953; the couple celebrated their 65th anniversary last year. To this union they had four sons and one daughter.

Don's family was important to him, which led him to take a job as a farm laborer in the Saco area. He worked as a mechanic at the "Old Chevy Garage" prior to opening his own mechanic shop and gas station Don's Conoco where he could make a motor hum. He then worked at MDU until he retired in 1995. Throughout the years while working full-time and raising his family, Don found time to be a wheat farmer. He took pride in farming his wheat and once was able to sell it for $20 a bushel.

Don had many hobbies which included restoring an old tractor, ice fishing on Nelson Reservoir, traveling and was always good for a game of cribbage. He was a lifetime Minnesota Twins fan getting to watch them play at both the Metrodome and Target Field. It was made even more special when, Trevor Plouffe, his cousin's grandson, played third base. Don had a deep sense of accomplishment for his blue-ribbon winning garden. He was even able to get his seeds in the ground this spring.

Don worked hard his entire life to provide for his family. He taught his kids that work ethic is a choice and one of the most important keys in life. Don took pride (and his children are grateful) that he had instilled those values.