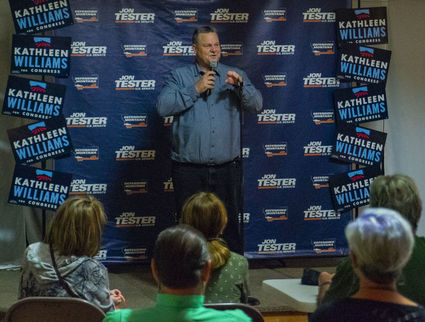 Tester Speaks to an audience at a campaign event in October, 2018 at the Glasgow Elks Club.

From his office in Washington, D.C., Senator Jon Tester took time to speak to the Courier in a phone interview on April 2 about national and local issues. including trade and tariffs; the Keystone XL pipeline; and Special Olympics funding.

Healthcare was a defining issue in the 2018 midterm elections, in which Senator Tester was reelected, and is predicted to be a core issue in the 2020 campaign. Much has been made of skyrocketing prescription costs, and Tester touts the bills he's working to push through the Senate. First up is a bill that would require pharmaceutical companies to disclose when they plan to raise prices and "make 'em justify why" they're raising them, creating more transparency. Citing insulin as a drug that has been around for decades and has increased in price, Tester questions, "Why is it necessary to rise the price of insulin?"

Tester is also looking to make generic drugs more accessible by making pharmaceutical companies give their drugs to generic companies in a timely manner, noting that some companies hold back on that information even after patents have expired. Getting that information to the generic companies will allow them to make their less expensive versions more efficiently and quicker. Another bills targets pharmacy benefit managers, which as middlemen in the system, drive costs up further.

Even as Tester fights to bring down the costs of prescription drugs, he acknowledges healthcare at large is an issue. He notes that payments that had been going to hospitals have been reduced, hurting small hospitals similar to Frances Mahon Deaconess Hospital in Glasgow. He wants to make healthcare work in rural communities "doing commonsense stuff."

Tester notes the divide between the need for bipartisanship and campaign made promises. Speaking of the current administration's new standpoint that the Affordable Care Act should be struck down in the courts, he said, "The Supreme Court has already stood it up. But nonetheless, they don't have anything to replace it with but the old system. And the old system just had way, way, way too many costs that were paid by somebody else."

He calls for real leadership to drive down costs and hold insurance companies accountable, but expresses concern about where government leaders are going. "My concern from a rural standpoint," he said, "is that if we start losing rural hospitals, whether it's in Glasgow or whether it's in Chester or anywhere in between, those communities are put in a world of hurt."

"Look, right now, not a lot." Unfortunately that is what is being done to help bring wheat farmers to parity with soybean farmers impacted by tariffs in the ongoing trade dispute with China. Speaking of the Senator's role in fighting for Montana farmers, Tester says there is not much to be done in his branch of government. "The Congress has given away a lot of the trade authority we had to the executive branch, willingly long before I got here," he told The Courier. He elaborated, "That was a huge mistake and it doesn't leave us a lot of tools to fight back on a lot of this tariff stuff."

Tester is pessimistic on what the future may bring for wheat farmers if there is no agreement reached on trade. He predicts many soybean acres will be converted to wheat which will further depress the price wheat farmers are paid for their product. He expresses concern that the federal government will soon find itself in a situation in which they will be looking at another emergency funding program for farmers around the country. A number of mistakes in trade policy, including the pulling out of the Trans-Pacific Partnership, have led to a loss of trading partners and markets. While the Senator would like to fix these issues, he says it is in the executive branch's purview right now. "I don't have any ideas on how we can fix it other than the people standing up and saying, 'Whoa, we need these trading partners, especially our international trading partners.'"

An issue of great importance to Valley County, and neighboring Phillips County, is the Keystone XL pipeline. Recently President Donald Trump issued a presidential permit authorizing TransCanada " ... construct, connect, operate, and maintain pipeline facilities at the international border of the United States and Canada ..." Senator Tester supports the construction of the controversial project, saying it needs to be built right, using American steel and the best technology available to protect the Missouri. "I don't see the controversy like a lot of folks do back here," he said before stressing the need for TransCanada and the Army Corps of Engineers to communicate with local tribes and other communities that have concerns about possible pollution above water intakes. "They need to figure out ways they can build this thing so the water supply is bulletproof."

With the local Special Olympic games approaching on May 2, Senator Tester expressed gratitude that President Trump overrode Education Secretary Betsy DeVos' proposed budget which would have eliminated funding for unified schools, of which Glasgow is one, in the Department of Education budget. "For the dollars we spend, I don't think there's a bigger gain for the buck," he said. "I'm glad the President reversed his opinion on that and decided to fund it. It's been a good program.