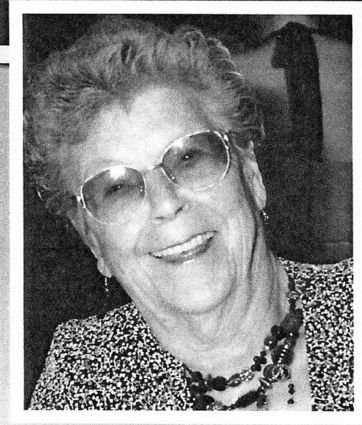 Anna "Mae" (Brookes) Tootell, our beloved mother, grandmother, great-grandmother, aunt, cousin and friend passed away peacefully on Saturday, Feb. 16, with her grandson Patrick by her side. She was 92.

She was born on May 22, 1926, in Chestnut, Mont. She was the third of five children born to Elizabeth (Maykuth) and James Brookes. In Chestnut, she lived the childhood that most can only dream of surrounded by her aunts, uncles, cousins and grandparents. Family meant the world to Mae.

She graduated from Gallatin County High School in 1944 and went on to to work for the telephone company in Bozeman, Mont., for many years. She started as an operator and eventually became a line dispatcher. She retired in 1981 but continued to do contract work for them in Helena for a few years after.

In 1954, Mae married Bob Tootell but they later divorced. They had two children, Bobbi and Don. Mae lived for her children. She loved her family dearly, but she had the fiercest love for Bobbi and Don. She raised them in a day when she had to fight daily for the respect of many of her male coworkers. She fought hard and worked hard every day to give her kids the best life she could. She will never know how appreciative we are for having such a wonderful mother.

Her grandchildren were the icing on her cake of life. From the moment they were born she spent as much time with them as was possible. She missed very few ball games, track meets, concerts or performances even though she lived 320 miles away for many years. She helped with 4-H projects, played baseball and football, built forts and kissed away tears. At the age of 80, she moved from Bozeman to Saco, Mont., to be closer to Bobbi. She loved her new life and her new home. She made many friends in Saco and enjoyed being part of the community.

Mae loved to travel. She took her kids on many memorable trips and later in life, went on yearly vacations with Bobbi and her family. Her last trip (at age 90) included New York City where she was finally able to see the Statue of Liberty and was wheeled right through Times Square. She loved it and wanted to go back the minute she got home. She recently said that she had lived a wonderful life.

We will miss you forever Mom and the hole in our hearts will never be filled.

She was preceded in death by her parents; three brothers, Jim, Ray and Gene Brooks, and one sister, Marie Murphy.

She is survived by her son, Don, his wife, Krisi, and their four children, Jesse, Mitch, Brittney and Jeremie; her daughter Bobbi, beloved son-in-law Russ Menge and their children Patrick (Haley) and Christian; 10 great-grandchildren, including Luke and Andrew Menge and Elizabeth Benson; nieces and nephews Bitsy (Jr.) DeGidio, Bud, Tim and Don Murphy, June (Bob) Switzer, Shirley VanDyken, Linda Thomas and Chris (Jenny) Tootell; and her many special cousins.

Funeral services were held on Saturday, March 2, in Bozeman.

Donations may be made to Lutheran Social Services, 3940 Rimrock Rd. Billings, MT 59102, or any charity of your choice.