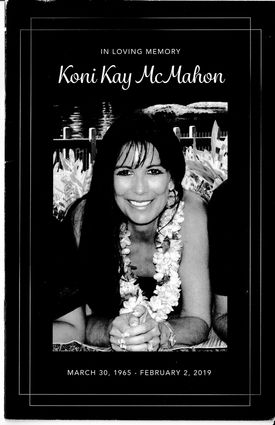 She was born in Glasgow, Mont., on March 30, 1965, to Warren Karst and Janice Karst Hodges. She joined brother, Rod, and sister, Kristi (Karst) Stingley at the family home; younger brother Randy, was the last to join the family three years later.

She attended school in Glasgow and graduated from Glasgow High School in 1983. She was a cheerleader and a member of the Scottie Band. While in high school, she worked at Eugene's Pizza, Sam's Supper Club and the Fashionette.

Koni always had a love for animals. While growing up she knew every cat and dog in the neighborhood. This love continued throughout her life.

Following graduation, she attended the International Air and Hospitality Academy in Vancouver, Wash. She graduated at the top of her class. She was too young to get a job as a flight attendant, so she decided to move to New York and work as a nanny with good friend, Shellie Tufton. While working as a nanny, she met actress Kathleen Turner, who was a guest at her host family's house. One other notable event while she was working as a nanny was her preparing a ham dinner for her host family who was Jewish! (A small-town girl from Montana did not learn that lesson in school).

She quit work as a nanny and went to work at a group home. Both her and her brother Randy had some memorable experiences with the clients. It was during this time in her life that she met Bill McMahon.She and Bill moved to California and married at the mission in San Juan Capistrano.

Koni opened up a child's clothing store (Fairy Tales) in San Clemente. Her daughter, McKenzie, was born during this time. She loved Fairy Tales, but had to sell it when her and Bill moved to Norco, Calif. Norco, "Horse Capital USA", was a perfect fit for Koni as it allowed her to get a horse. McKenzie joined her mother in being a horse lover, and became an accomplished rider and showman. Michael joined the family and didn't wait long before he became an all-around sportsman (karate, baseball, soccer and volleyball).

Koni's kids were the joy of her life. She spent countless hours volunteering at their schools and attending the kid's many activities. She was an avid movie fan and attended movies almost weekly.

She was proceeded in death by one brother-in-law, Christopher; and her father-in-law Michael.

Services were on Saturday, Feb. 16, at Los Sierra University Church in Riverside, Calif., with burial at Lawn Crest Cemetery in Norco, Calif.