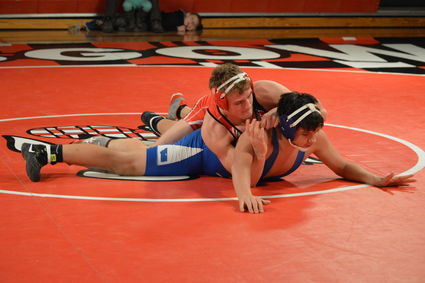 Dylan Nieskens at duals vs. Havre held at GHS on Jan. 8. He beat the number-one contender at 170, placing 5th at that wrestling meet. He placed 1st at the Malta meet.

The Glasgow Scottie wrestlers spent last weekend, Jan. 25 and 26, in Malta taking second in the tournament beating out the Mustangs, which placed third and coming in behind the Class A ranked team Havre at Saturday's match-ups. On Friday the Scotties dominated Malta in a dual that left Glasgow with 66 points and Malta with six.

Scottie Coach Jory Casterline described the tournament as "not bad" while discussing the results which saw first place finishes by Colton Fast (126), Oden Hallock (132), Dylan Nieskens (170) and Mayson Phipps (285), along with podium finishes from five other wrestlers.

"We had some good wins," explained Casterline, "We had some guys open up like Oden Hallock who ended up beating Koltor Shipman [of Malta] twice, both in the dual on Friday and in the tournament." Of Hallock's performance, Casterline said Friday's dual with Shipman had started off slowly but he battled back and won the match. "As coaches we are always talking about opening up and being aggressive. He [Hallock] finally did that with Shipman this weekend."

Casterline praised the top competitors on his team commending Colton Fast for his consistency and skill on the mat saying with the expectation of a top-ranked contender that, "Fast just comes in and does what he does." According to the coach, Ty Kittleson, who placed second, and Dylan Neiskins performed well at the tournament along with Cooper Larson, who took third and Mayson Phipps. Of Phipp's performance Casterline described it as a dominating performance against Chester-Joplin-Inverness's Reubin Swenson, 34-13.

With Malta out of the way, Casterline has set his sights on the upcoming Divisional Tournament in Forsyth this coming weekend. Casterline was anxious in the sense that he hopes to get his 16 wrestlers through the week healthy and ready to wrestle.

"We've prepared all season for this," said Casterline adding, "Some times our division is harder than the state tourney." The coach explained that with many of the state's top teams crammed into the Eastern Division, the competition to make fourth at Divisionals to progress to State can be more competitive than the actual state competition can be.

In the end, the coach is looking to take 16 wrestlers and put points on the board for the team. "Divisionals comes down to the numbers and the depth," said Casterline adding that Glasgow took top spot at the tournament last year, but he feels Colstrip and Huntley are both solid favorites going into the 2019 event.

Casterline also stated the team will look to score points and he will just make sure everyone stays fit and ready for the upcoming tournaments. "We keep telling these guys don't focus on the 'W', look at scoring points in the match."

"It is kind of a stressful week for coaching staff," said Casterline half-jokingly, "You hope your guys are doing the right things."