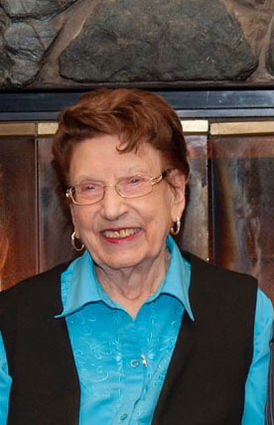 She was born to Ruby and John Willer in Glasgow, Mont. She had two sisters, Ruby and Blanche, and two brothers, Tom and Jim, all of whom preceded Vera in death.

She had an adventurous and independent spirit. In 1949, she and her husband, Terrence Robbins, moved to Alaska, along with Dale "Mickey" and Connie. Their daughter, Terri, was born in Juneau. Terrence was lost on a hunting trip in 1963.

She worked for the U.S. War Department, Air Force, from July 1942 to May 1944 in Great Falls, Mont., and from May of 1944 to May of 1945 in Auburn, Wash. She worked as a secretary for the Department of the Interior, Bureau of Reclamation, in Fort Peck, Mont., from January of 1946 to September of 1947. After moving to Alaska, Vera worked for the Alaska Road Commission for several years, and then went to work at Department of Public Works, where she continued as secretary to the Commissioner until 1967. She finished her career as a Deputy Court Clerk of the Federal Court, retiring from that position in 1986. She lived in Juneau until 1996, when she moved to Washington state.

Vera enjoyed active membership in many professional and service organizations. She attended the Episcopal Church in each community where she resided. She traveled extensively, both to visit family and friends, and to explore her world. She loved reading, traveling, entertaining, fishing, and spending time with her dog, Buffy, her many friends and especially, her children.

She maintained strong ties with Montana. She returned frequently to visit over the years. Her last trip to Glasgow was in June of 2018 to help her niece, Karen Hanvold, celebrate a birthday. For many years, Vera attended annual reunions with classmates from Glasgow High School and was a regular donor to various scholarships sponsored by Class of '38.

Vera worked hard to give herself and her family a good life. She was proud of the things she was able to provide for them but the best things she gave to her children were a sense of family, the ability to make friends easily, an openness to new experiences, a desire for knowledge, and a quick wit, often expressed with her wicked sense of humor. She will be missed but never forgotten.