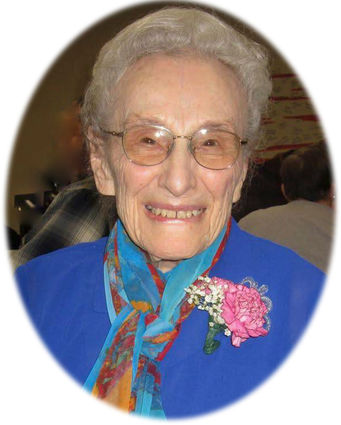 On Oct. 30, 2018, at the age of 105, Elizabeth (Born) Friesen moved from Nemont Manor to Valley View. Her desire to be home with Jesus was granted and she passed away less than two months later on the morning of Christmas Day, 2018.

The funeral service will be held Thursday, Jan. 3, at 10:30 a.m., at Glasgow Evangelical Church with a reception following. Burial will follow at Lustre Mennonite Brethren Cemetery in Lustre, Mont.

She was born on Feb. 15, 1913, in Omsk, Russia, to Jacob and Katarina Born. When she was one year old, her family, grandparents and relatives, a total of 28 people migrated to Liverpool, England. From there they took a passenger ship and headed for Canada. In 1916, Elizabeth, with her parents, sister and two brothers, crossed the border of the United States in a covered wagon and homesteaded in Larslan, Mont., moving to Lustre in 1923.

After graduating from grade school and finishing two years at the local Bible School, she married Harry F. Reddig in 1932. Their daughter, Elinor, was born in 1933. In 1935, her husband Harry died of pneumonia. Their son, named Harry after his father, was born in 1936. It had always been a dream of Elizabeth's to teach, so she finished high school by correspondence and then attended Northern Montana College-all the while helping her dad with calving, milking and other farm work. She graduated in 1948 with a six-year teaching certificate. Three years later, she married Pete Friesen and their daughter, Eileen, was born in 1958. In 1983, they retired from the farm and moved to Glasgow, Mont. Pete died in 1996 and Elizabeth moved to Nemont Manor.

She loved the Lord, her family, attending church, quilting, and entertaining among many other things. In 2011, she wrote that "Everything is getting slower, also my mind, but I still enjoy going to church, singing, listening, praying and Bible studies. I did enjoy sewing, reading, singing, quilting, embroidering and other handwork... Of course, I enjoyed visiting with the family both here and in their homes. One of my greatest joys is holding a baby, new life!" She read through the Bible every year from 1976 through about 2015, a tradition she hoped her children and future generations would continue. Most of Elizabeth's family lived miles away, but they all knew that she prayed for them every day; she will be greatly missed!

In memory of Elizabeth, donations can be made to her church of the last 35 years, Glasgow Evangelical Church.