By George Kulczyk
The Courier 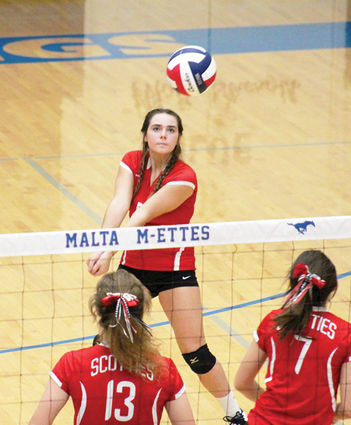 Marie Peterson / For the Courier

Jaycie Nielsen keeps her eye on the ball during Glasgow's match vs. Malta on Oct. 11 . The Lady Scotties defeated the M-Ettes in the conference match-up.

The Lady Scotties are packing in a lot of wins at the end of their season. With wins against Malta and Harlem, they extended their overall record to 8-2 and their conference record to 6-2.

"We played a great match in Malta," said head coach Somer Hoerster. "We played really well after having to change our game plan with Rachelle's (Glaser) injury in practice on Monday."

"Tyann (Graham) stepped up to set and did an awesome job all weekend," she said of one of several freshmen on the team. "She definitely reacted well under the pressure."

Hoerster was happy with the team's overall effort in Malta, noting that it was a "nice solid effort" and added that, "We had some great defensive play which was really nice to see so close to the tournaments."

"Now, we're going to spend this week preparing for Sidney and Glendive," said Hoerster. "And get ready for tournaments."

The Lady Scotties will host Sidney for "Pink Night" at GHS on Thursday, Oct. 18, and Glendive for "Senior Night" on Saturday, Oct. 20. Games against Sidney are scheduled to begin at 3:30 p.m., and Saturday's games are set to start at 1 p.m.