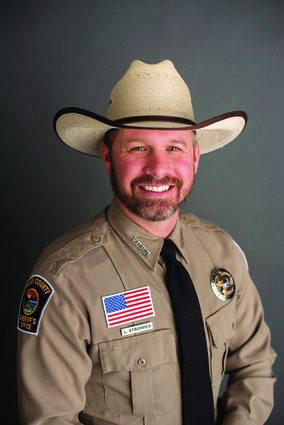 Valley County Sheriff's Deputy Luke Strommen is being charged with Felony Sexual Abuse of a Child according to court documents filed in District Court in Glasgow on Oct. 11.

According to court documents, Division of Criminal Investigation (DCI) was contacted in May 2018, regarding allegations of improprieties of a sexual nature by Valley County Sheriff's Deputy Luke Strommen. During the course of the investigation a possible victim was identified, who was 17 years old at the time of the incident.

At the time the investigation was initiated in early 2018, Luke Strommen was serving as undersheriff and running for Valley County Sheriff. He has since been demoted back to deputy.

The victim confirmed she met Strommen in 2014 while he was on duty during a traffic stop and they had an intimate relationship for approximately one year. During this time, the two communicated via phone, text and email while also meeting for sexual encounters. The victim stated the majority of the time they would meet, Strommen would be in uniform and on duty.

Also according to court documents, Strommen encouraged the victim via phone, text and email to send him sexual images of herself. He also encouraged her to engage in sexual conduct and send him photographs of that conduct. Court documents state "The victim described the defendant as 'very sly, conniving, and power-hungry,' however she confirmed that her intimate involvement with the defendant was consensual."

The victim provided investigators the iPhone that was utilized in 2014 to communicate with Strommen and a Cellbright phone extraction was completed with the victim's consent. Numerous conversations and images between the victim and defendant were located.

The charges also state an agent with DCI corroborated Strommen's tactics and behavior with statements by multiple witnesses and other involved parties. Based on facts submitted in the court documents, DCI believes probable cause exist to charge Strommen with Felony Sexual Abuse of a Child.

A summons was signed by District Court Judge John Larson, of Missoula. Strommen is expected to appear in District Court in Glasgow on Tuesday, Oct. 16, at 1:15 p.m.

More information will be available in the Oct. 17 edition of the Glasgow Courier.