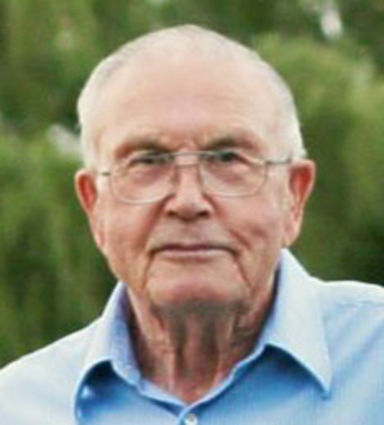 Norbert Joseph Unger, "Fritz" to all who knew him, 92, passed away and into the presence of His Lord and Savior Jesus Christ on the morning of Sunday, Sept. 9, 2018, which was also Grandparents Day. It was a fitting day to leave this life for a man who was a cherished grandfather and great-grandfather to so many in his family.

He was born July 13, 1926, to John H. Unger and Agnes (Friesen) Unger on the family farm near Munich, N.D. The third oldest of 11 brothers and sisters, early on he learned to work the land, to use his hands and to repair anything and everything with whatever he had on hand. He was drafted into the Armed Services in 1944, and was baptized as a believer in Jesus Christ before he left for duty. He served as a medical technician during World War II at a base camp in Eritrea, Africa. Throughout his life, he used the skills he learned as a medic to care for his own children and grandchildren.

After returning from the war, he married the love of his life, Alice Wall, on June 1, 1948. Fritz and Alice celebrated their 70th wedding anniversary this past June. The couple settled on the farm in Lustre, Mont., where Fritz was passionate about farming, especially farming with his John Deere equipment. He experienced many changes in farming technology – he started with horses and plows and finished using GPS technology. While farming, he loved to work with metal, whether using it to make repairs or engineering a new design to make his work more efficient.

Aviation was a passion for Fritz. He owned several planes throughout his life, and was always willing to offer his plane and piloting skills to those who needed his help. His love of flying traveled down through generations, to a son and grandson and others who he came in contact with. He was known for his generosity, and was willing to give time, activity and resources whenever a need arose.

This generous spirit meant that he willingly served throughout the years as a trustee and board member of Lustre EMB church and as a board member of Lustre Grade School, Lustre Christian High School, Beacon Bible Camp, as well as a coordinator for Mennonite Disaster Service. He recruited teams and worked alongside these teams in various disasters. He also served his community as a school bus driver and enjoyed telling stories of his adventures with the kids. In fact, Fritz was always ready with a story, whether it was of his time as a medic, of growing up around the dinner table with nine siblings, of flying, of raising four kids with Alice or entertaining mishaps on the farm.

He was always an active churchgoer, but in his later years, church became even more precious to him. He so looked forward to Sunday morning, and especially singing his favorite hymns. He always said that Alice was the real singer, but we all knew that he loved to sing even if he didn't necessarily want to do it in front of others.

In 1995, Fritz and Alice retired from farming and in 2003, they sold their home and moved to Billings, Mont., full time. He volunteered at Billings Clinic Hospital for over 10 years after many years volunteering at a hospital in McAllen, Texas, during the winters. Once again, Fritz loved to give of himself and enjoyed ushering patients in wheelchairs, chatting with them, finding out about their lives and telling stories of his. In 2016, they moved to MorningStar Senior Living and the family is extremely grateful for the loving care given to him in his final weeks of life.