The Big Harvest and All the Go, Go, Go 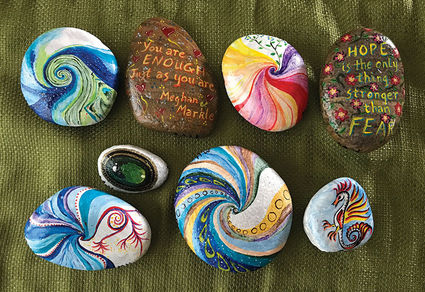 These rocks are ready to head into town with me and be hidden for others to find and re-hide.

There hasn't been much gardening or cooking done this past week as we've gone after harvesting our yearly income. When the wheat is ready to combine, that's what we do, almost to the exclusion of all else. Right now, I have a really good reason for the house being a mess. We've hardly been home long enough to notice what hasn't been done. While I'm spending the greater part of my days out in the field, my mother-in-law has stepped up to prepare hearty noon meals for us. She also makes a light supper of sandwich, fruit, and a sweet we can take with us. She's greatly appreciated.

It's just the two of us gathering in our crop. My husband, Dennis, not only drives the combine, he also drives the semi-loads of wheat from the field to the bins. He weighs the truckloads and keeps track of how much wheat comes from each field. He'll be the one moving the auger to the next bin when each gets full. My job is running the grain cart. I drive alongside the combine and receive the wheat once the combine is full, while he's still cutting. Once my cart is full, I haul it to the semi parked at the end of the field and fill the truck. After we fill the cart again, we shut down to take the wheat to the bins. It takes about three combine loads to full the cart, which fills the truck. In a good day we'll get six truckloads of wheat cut.

The last two loads each day generally don't get unloaded until the next morning. We don't have lights at the bin sites, and it isn't safe to be working with the augers in the dark. That works out well as the wheat is generally still too tough to combine right away. That's because the moisture comes up during the cool nights. I use that time to prepare our lunches (my farmer calls it breakfast, lunch, dinner, lunch, supper – what I call a snack he calls a lunch) for the day, as well as drinks. We go through a lot of water plus at least one thermos of a lemonade/tea mix. His lunches don't vary much - a couple of Clementines, a small container of cashews, maybe a cookie or some candy, and some crackers. Mine, however, are all over the place.

If there's enough time, I'll run out to the garden and pick a bunch of my sun-gold cherry tomatoes, or dig a few carrots and wash them. Those make great snacks. Sometimes there will be a pepper (banana, green, or another color) ready, or a cucumber. On other days there will be enough time to dig a hill of potatoes or to grab some ears of corn for mom to use for dinner for all of us. I had enough peas picked (the birds haven't realized those vines are producing again) for us to enjoy creamed peas with those potatoes. One day last week I snacked on scrubbed, raw baby potatoes. I have quickly sliced a cucumber, chopped a couple of tomatoes, and marinated them in my poppyseed dressing (that recipe was shared earlier this summer with one of the Swiss chard salads). I also took out a small container of my InstaPot pickled beets, that also had an egg pickled along with the beets and onion. I try to keep it healthy, but there's usually also a cookie or some dark chocolate-covered blueberries in the cooler to tempt me at the end of the day.

We didn't really get started with the combining until Tuesday afternoon. I used last Monday to can five pints of bread and butter beets, as well as three pints of tomatoes. There will be a repeat of this soon. I missed out on attending our ladies' golf league end of season banquet, but I'm okay with that. It's to be expected. As I said, when the wheat is ready, it's work time.

Right now we are shut down because of Sunday morning's rain. I'm tackling laundry, baking bread, and staring at the mess the house is in. Ah, well, it won't clean itself, so I'd best sign off on this week's column, straighten out the clutter, start dusting, and then drag out the vacuum. (I'd much rather be creative and paint some more rocks. There will be a run to town to restock the larder, so the rocks I painted a couple weeks ago can be "hidden").