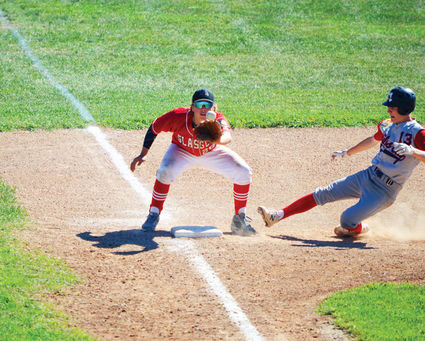 Tel Aune is ready to make a play at third during a home game vs. Miles City on July 3.

The Reds didn't lose a single game on their way to winning the championship in the First National Tournament held in Williston July 6-8. It was their second consecutive championship at the tournament.

On Friday, Glasgow played Watford City and got the 4-2 win. Darrin Wersal led the Reds at the plate, going two-for-three and bringing in one run. Bryce Legare recorded two RBIs in the contest.

The boys were stealing bases left and right with Gavin Adkins, Legare, Kevin McDonald, Keagan Thompson and Wersal taking a base during the game.

John Cremer pitched the entire game for the Reds, earning the win. He threw 95 pitches in seven innings, allowing two runs on six hits and striking out five.

Tel Aune, Kristian Price and Adkins executed a double play to make quick work of shutting down Watford City in the third inning.

On Saturday, Glasgow faced Bismarck in a late morning game and earned a 12-3 victory. Although Bismarck got an early lead with three runs in the first inning, Glasgow shut down their offense for the rest of the game, denying them any more runs.

The Reds recorded 12 runs in 17 hits, with a big fifth inning to secure the win. McDonald sparked the scoring streak with a Grand Slam home run in the top of the fifth.

Adkins, Kaden Fossum and Legare each hit a double in the game, and multiple RBIs were recorded: Adkins, Fossum, Legare, Thompson and Chase Guttenberg each had one, Aune had two, and McDonald had four.

Fossum, Guttenberg and Thompson all had a stolen base, and the game boasted a number of double plays. Adkins had three, Aune two, Guttenberg one and Wersal two.

McDonald took the win for the Reds, pitching without relief from the bullpen. He tossed 100 pitches and faced 29 batters, allowing six hits and three runs and striking out six.

On Sunday, the Reds played their final two games of the tourney, first facing the hometown Williston Oilers.

Williston started the game with a run in the first inning, but could not stifle the Reds' offense and allowed Glasgow to score nine unanswered runs in the rest of the game. Defensively, Glasgow was error-free. The fifth inning was again a big inning for Glasgow with seven of their nine runs scored. The Reds' offense in the inning came from singles by Thompson, Adkins, and Aune, a fielder's choice by Cale Swanson, and a double by Wersal. Thompson went 3-for-4 at the plate to lead the Reds in hits including a double in the fourth inning and two RBIs. Wersal, Adkins and Aune also brought in two runs each and Swanson earned one RBI in the game.

Wersal pitched Reds to victory. He allowed four hits and one run over six innings, striking out seven and walking one.

Glasgow faced Bismarck for the second time of the tournament in the championship game Sunday evening, and defeated them for a second time with a score of 13-9. 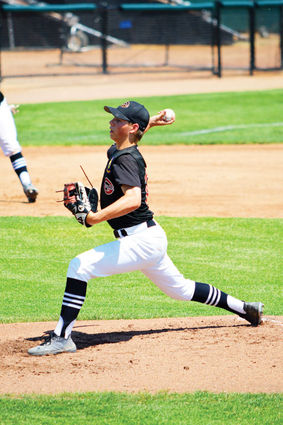 John Cremer throws a pitch during a game vs. Watford City on July 6.

Although Glasgow benefitted from Bismarck's nine game errors with seven runners that reached on errors, the Reds also had a big game at the plate with 13 runs off as many hits. The Reds put up four runs in the sixth inning which was driven by a walk by John Cremer, a single by Legare, and an error on a ball put in play by Guttenberg. Adkins hit the only double in the game and had two RBIs and one stolen base. Fossum and McDonald each brought in one run while Guttenberg had three RBIs and Legare had two. Aune, Cremer and Thompson each had a stolen base in the contest.

Adkins, Guttenberg and Wersal all contributed defensively with a double play to close out the top half of the second inning.

Price was the winning pitcher with the save going to Adkins. In four and one-third inning, Price allowed nine hits and seven runs, striking out two. Adkins pitched two and two-third innings and recorded the last eight outs for the save.