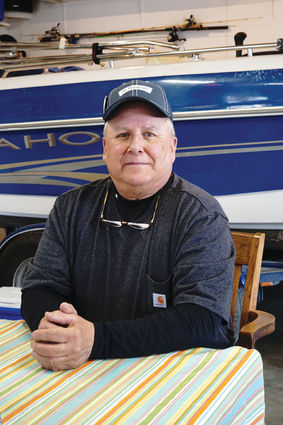 Gilbert Mogan poses for a photo at his home in Glasgow

Gilbert Mogan is one of seven candidates chasing the Valley County Commissioner seat being vacated by Bruce Peterson this fall. Mogan sat down with the Courier to discuss his background, experience and motivations for obtaining the job.

With a few exceptions, Mogan has called Valley County home nearly all his life. Graduating from Hinsdale High School in 1971, he went on to work for the family farm. During that same time, he enlisted in the Montana Army National Guard and served in maintenance for eight years. At age 35, he left the farm and went in to agri-business working for elevators in Hinsdale and Saco before running the Agronomy Center for Farmers Elevator in 1995.

Asked why he was running for Valley County Commissioner Mogan replied, "I'm retiring, and my dad, who is 92, said you need something to do in retirement." Mogan said he had spent a lot of time out in the public helping, and that he thinks he could continue to serve Valley County as a Commissioner. Mogan emphasized that while managing the Agronomy Center he operated a multi-million dollar agricultural business that he feels will aide him in a county reliant on agriculture.

Mogan stressed his adaptablity and work record stating that he had never had an accident or Occupational Health and Safety Administration complaint while running the center. "We were always trying to stay one step ahead of them," said Mogan, while discussing the county's need to adhere to regulations and manage county employees.

Like many in the race this year, Mogan stressed that he could learn the job, and adapt quickly. "If I don't know an answer, I'm not afraid to call somebody to find out what it is." Mogan also added that he had experience as a member of the Hinsdale School Board with managing tax payer funding, which he believes would contribute to his readiness for the role.

Mogan also talked about what he wanted to accomplish stressing, "I don't have an axe to grind. When I was running for school board my dad, who is my mentor, said don't do it if you have an axe to grind, because you will just mess the board up." Mogan stressed that he wanted to serve the county in the best way he could and that changes would come as they need to stating, "I don't know of anything that's broke."