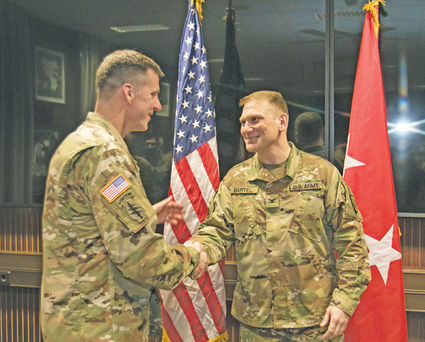 Jeremy Bartel, son of Larry and Linda Bartel of Glasgow, was recently promoted to the rank of Colonel in the U.S. Army on March 2 in Stuttgart, Germany.

Bartel graduated from Glasgow High School in 1993 and has had an extensive military background. He enlisted in the Montana Army National Guard in 1992 and earned his commission as a U.S. Army 2nd Lieutenant from Kemper Military College in Bonneville, Mo., in 1995. As an engineer officer, he was assigned to the 1st Infantry Division in Germany before passing Special Forces Assessment and Selection, earning his Green Beret as an Army Special Forces Officer.

From there, he served in the 1st Special Forces Group (Airborne) in Okinawa and attended the Naval Post Graduate School in Monterey, Calif. He then returned to the 1st Special Forces Group in Fort Lewis, Wash., before coming to Germany to serve in the U.S. Special Operations Command Europe for the first time. He later served in Korea with 2nd Infantry Division, and was selected for a U.S. Army War College Fellowship where he spent a year in Israel.

He returned to U.S. Special Operations Command Europe, where he has now been selected to serve as the next garrison commander of U.S. Army Kwajalein Atoll in the Marshall Islands.

During his career, Col. Bartel has been deployed multiple times to Operation Enduring Freedom in the Philippines and Afghanistan as well as Iraq and Kosovo.

Bartel is very humbled by this promotion stating, "I'm honored to be selected to continue to serve this great nation. It would not have been possible without the support of so many great soldiers and my family."

In order to receive this promotion, Bartel was screened by the department of the Army and selected based on his demonstrated performance and expected potential. Officers selected to this rank have at least three years of service at the rank of Lieutenant Colonel. The selection is a highly competitive process, as typically 50 percent or less of those screened for promotion are actually selected.