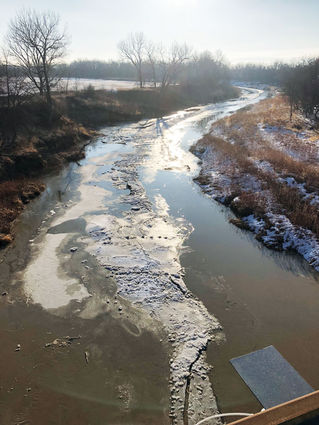 Patrick Gilchrist / For the Courier

Ice jams on the Milk River have begun forming looking East from the Hwy. 24 bridge near Glasgow.

Based upon the latest models at press time, the National Weather Service in Glasgow is projecting that flooding is almost imminent for the Milk River in Glasgow; it's just a matter of when.

Thankfully, flooding hasn't really been on anyone's radar lately due to abnormally low temperatures for this time of year. According to Warning Coordination Meteorologist Patrick Gilchrist, it is very unusual to have this much snow on the ground this time of year, stating, "The longer we hold onto the snow, the lower the chance of major flooding." Consistent temperatures of warmer days and cooler nights have helped slow down the rate of melting for the snow that fell, which as each day goes on, lessens the immediate concern for flooding.

According to Gilchrist, the average temperature for this time of year is 51 degrees, and fortunately or unfortunately, depending on how you look at it, that temperature is not expected to be reached anytime soon. Fortunately, because not getting that warm, means the snow drifts can continue to ease their way through melting and really work it's way into the soil, which is good news in terms of drought relief and minimized risk of flooding. Unfortunately, because these cooler temperatures are affecting the calving season, farmers and ranchers need to take extra precautions and care to ensure the survival of their new livestock.

Besides the abnormal temperatures, another factor that determines flooding potential is big rain events. When strong systems come through producing a lot of rain, the process of snow melting speeds up, which when combined with the heavy rains, can quickly increase the chance of flooding. When talking with Gilchrist, meteorologists at the NWS are keeping a close eye on a system that is projected to bring significant rainfall this upcoming weekend. Right now, it's too early to determine how much rain is expected, and therefore too early to determine how that will impact the snow that is still lingering around.

Another concern with the varied temperatures we have been having is ice jams, which can cause rapid flooding when the water quickly backs up from behind the jam.

Gilchrist wants to let anyone know who is living near the Milk River to be aware of ice jams as river levels can quickly change without warning. If any ice jams occur, contact the NWS office, as some jams can produce extensive flooding.

When determining flooding risks, Mother Nature truly holds the power. One week of consistent high temperatures and/or one week of continuous rain can rapidly change the outlook of flooding, and flood risk can quickly jump. The meteorologists at the NWS do what they can with what is given to them by technology, but only Mother Nature can really determine when and how the area will flood.