By Brady Flaten
For the Courier 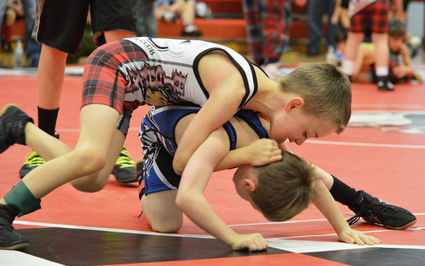 Hunter Pierce works at getting the best of his opponent during a match held in Glasgow earlier this season. Pierce went undefeated at the Sidney Invitational on Feb. 24, winning gold in the Bantam 45B division.

The Glasgow Highlanders had another dominating performance over the weekend. The youngsters crowned 16 champions and 31 top-three finishers overall at the Sidney Invitational held Feb. 24. The middle school wrestlers also turned in dominating performances in Havre and Belgrade in competitions held the same day. The middle school kids will compete in Lewistown Saturday, March 3 at the Middle School State tournament, while the young Highlanders will be competing in the Glendive Invitational. This marks the final tune up before State AAU in Great Falls beginning Friday, March 9.

In addition, the annual Spaghetti Feed / Pie Auction fundraiser is scheduled for this Thursday, March 1 at the Elks Lodge in Glasgow. This fundraiser is the club's biggest event of the year and money raised will be earmarked for out-of-state travel, camp expenses and construction of a new facility.