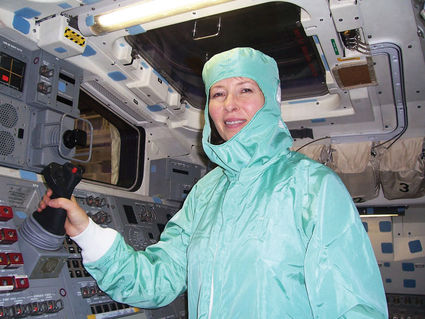 Courtesy Photo for the Courier

If you ask Armstrong to describe her response is simple:. "I'm an engineer," she said, "and I don't take anything for granted."

"I don't want to speak for the current board members," she told the Courier, " but I believe the land use is well represented and roads and county are well represented, and I believe I bring experience in business and delivering services to people."

Armstrong arrived in Glasgow in the early nineties as part of the Boeing team negotiating the purchase of the old Glasgow Air Force Base runway. Armstrong described how she and her team had to bring the various stakeholders involved in St. Marie together to make the deal as beneficial to everyone as possible.

During that time, Armstrong also came to love Valley County. "I met my husband here. I had my son right here at FMDH," she said, "and I compared every place I lived after here to Valley County. Nothing quite compared."

Armstrong's desire to serve the community has remained an important part of her retirement. She chairs the Friends of the Library foundation, previously chaired the Soroptomist's Block of Bucks fundraiser, and was very active as a volunteer at Valley View Home before becoming a board member in 2017. Armstrong was also a key figure on the Long-term Care Task Force, which has sought solutions to keeping Valley View Home a viable skilled nursing facility in Valley County.

Armstrong described her intentions, if elected, for her first weeks on the job: "I have a lot of learning and listening to do, but listening to the employees is really important." Her view is that the employees are the ones actually providing the services, and likely have ideas and views to improve those services."

The filing deadline for open Valley County positions is March 12.