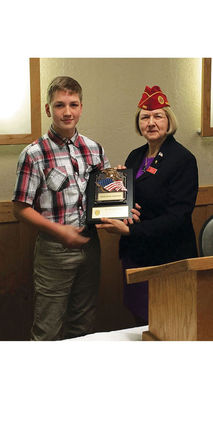 Jessica Nickels / For the Courier

On Oct. 28, local eighth-grader Kyler Hallock received a distinguished honor when he was presented the first ever Heroism Award at the American Legion's fall conference in Helena.

Hallock was recognized for actions taken during the bus crash that occurred on Sept. 19, at the rest stop between Glasgow and Hinsdale.

The accident injured classmates, a chaperone and also killed both drivers who were involved. After the accident, Hallock took above and beyond measures to ensure the safety of those around him. He helped friends off the bus, aided first responders who arrived on scene, checked on friends who couldn't easily move off the bus, attempted to move a broken seat off the chaperone, and remained calm and collected while waiting for emergency personnel to arrive. Even during the chaos of the accident, he had the piece of mind to borrow a first responder's cell phone and call home to let them know he was okay. Even though Hallock was injured during the accident, he put other's needs before his own to ensure they were okay.

The Heroism Award is the first award of it's kind to be presented nationally, and was presented to Hallock by National Commander Denise Rohan, who made history of her own by being elected as the first woman National Commander to the American Legion earlier this year. Rohan was made aware of Hallock's story as a result of Hallock's grandfather, Rodney Ost, notifying the State Commander, who then proceeded to tell Rohan. Letters were also submitted speaking to Hallock's bravery and unselfishness during the chaotic scene.

Over 25 members of Hallock's immediate family surprised him by attending and supporting him during the fall conference, of which over three quarters of those family members are members of the Legion in some capacity.

To exemplify Hallock's bravery during the event, the Courier received permission to print two letters that were submitted speaking to Hallock's actions on that day.

It is my honor to write this to you to recognize one of our most outstanding young men, Kyler Hallock.

On September 19, 2017, I responded to an emergency call that every emergency medical technician fears. A school bus accident involving students. In my 21 years of service to our communities, this type of call is one that I had hoped to never have to respond to.

Arriving on the scene seemed like a horrific dream but one that we had been trained to manage. As I arrived at the scene and assessed the crash, the first person I encountered was Mr. Hallock. As you can imagine itw as a rather chaotic time with lots of loud noises and cries. Mr. Hallock was so calm that it was hard to believe initially that he had been in the accident. I spoke with Kyler and assessed his injuries. He never complained about himself, or his own pain and was more concerned about the well-being of his friends, chaperone and us driver. While taking care of Kyler and getting him ready to be transported to the Emergency Room for further treatment, I realized I was taking care of one of the most selfless young men I've had the privilege of meeting. After the impact of the accident, Kyler, ignoring his own pain and inquiries came to the aid of his friends and chaperone. Kyler assisted one of his friends, who had been quite injured, form the wreckage of the bus and to safety. Kyler comforted and reassured his friends until help could arrive. Kyler also attempted to free the chaperone who had been injured but was entrapped in the wreckage and needed to be extricated by our fire department. Kyler not only did everything he could to help his friends but also called and alerted his parents and told them what had happened.

Throughout my care of Mr. Hallock, he spoke to me with such maturity and calmness. He was very clear on the events that unfolded and was able to assist us by giving us accurate descriptions of what took place. I would question him on his pain and injuries and he would politely answer me and then ask about his friends and at one point called out to one of them reassuring them that they would be okay. Kyler showed courage and compassion on a level that I had never witnessed from someone involved so personally in such a traumatic event. He was the shining light at a very dark moment for not only his friends but for the emergency services teams that were there.

Kyler Hallock deserves to be honored for his courage, calmness, maturity, compassion, and selflessness. Kyler is a young man who encompasses all of the qualities that so many of us strive for in our lives. His parents and my community are so very proud of him. It took one of the most horrific days in my career to meet the most inspiring young man and I am so grateful for that.

Kyler, you deserve to be celebrated in this way and in so many others. Thank you for what you did. Be proud and God Bless You!

To Whom It May Concern:

It is with immense pleasure that I write this letter of recommendation for Kyler Hallock to receive recognition from the American Legion for an extraordinary act of heroism.

On the morning of September 19, 2017, the eighth-grade class of the Glasgow Middle School was in route to Havre, Montana for a Social Studies/History field trip for the day. There were two large buses transporting most of the students and [a] smaller bus transporting four additional students, one of which had physical limitations and I, as the chaperone. Within 15 miles of the trip the smaller bus was hit head on by an oncoming pickup. The drivers of both the pickup and the bus were killed on impact. I was sitting directly behind the bus driver and the seat I was sitting in was pushed forward by an electric wheelchair that was behind my seat. I was then knocked to the floor and pinned down by the seat. The student with the physical limitations was thrown form the back of the bus to the front and was unable to move. One student broke his leg and the other two were injured but mobile. Both of those students were able to open the back door and get tot the front of the bus to help their dear friend. With all the commotion and turmoil surrounding the accident Kyler Hallock tried to help me by trying to pull the broken seat off me. I knew that the seat was not going to move and I told Kyler to help the others. Until emergency workers arrived, Kyler kept checking on me and the others all the while remaining calm and collected.

I was so impressed by Kyler's actions that I feel he is worthy of recognition, not only for his maturity and composure but for this true act of heroism.

Thank you in advance for your consideration of this recognition.