By Dane Osen
For the Courier 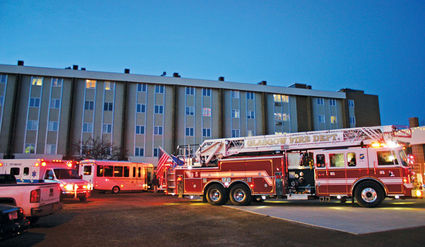 The Glasgow Fire Department responds to an incident at Nemont Manor on Dec. 2.

Early Saturday morning firefighters responded to an incident at Nemont Manor. The fire originated from a faulty furnace located in the basement. Although it was quickly extinguished, the smoke from the small blaze filled the building's basement and most of the lobby.

No injuries were reported as a result of the fire but due to the smoke several residents were evacuated from the premises while the smoke cleared. The residents were taken to the Milk River Activity Center by the Valley County Transit, Ambulances, and Glasgow High School's cruiser until it was determined that the situation was safe.

Glasgow Fire Chief Brandon Brunelle expressed gratitude to the Long Run Fire Department and to all who volunteered their help during the incident.