By Lori Dailey
For the Courier

The End of the Road

Scotties Lose Out of Divisional Tournament 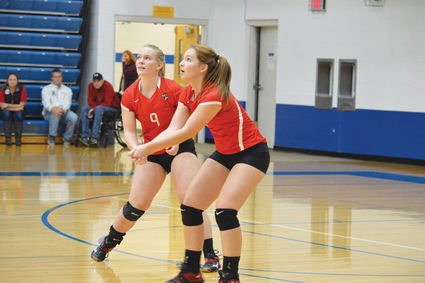 Kennedy Schmidt (left) and Madison Knodel (right) wait for a ball to drop during the Northern B Divisional Tournament held in Malta Nov. 2 - 4.

The volleyball season has come to an end and brought with it the usual range of conflicting emotions, but the prevailing feeling must actually be one of accomplishment. Even though we said goodbye earlier in the Divisional Tournament than we had hoped, the Glasgow Scotties did so with class and grace after having given their all. We coaches could not be prouder of the girls. Their fight and respect for the game and everyone affiliated with it never faltered.

So now we must say goodbye to the fine group of seniors who contributed to our many successes and welcome the new crop of athletes who are looking to join next year's team in the pursuit of excellence.

Ziggy Chamberlain, Baylie Chappell, Jesi Kennedy, Madison Knodel, Sophia Koessl, Hannah Mickelson and Kennedy Schmidt, thank you for your hard work and dedication to the team. You will be missed, looked up to and never forgotten. 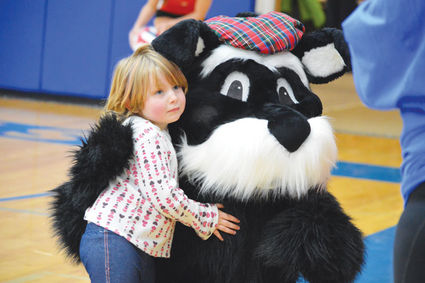 The Scottie mascot (Lexi Walton) gets some love from a Malta youngster between sets at the divisional volleyball tournament held Nov. 2- 4 in Malta.