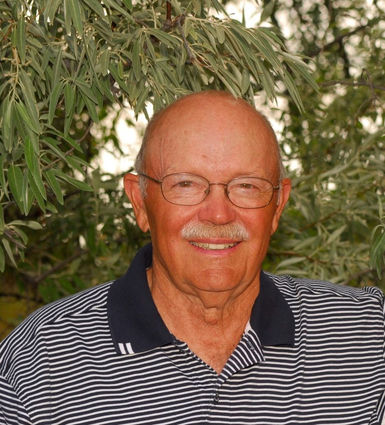 He was born on May 18, 1935, to Earl and Dalene (Crone) Wimmer in Scobey, Mont. He grew up in the town of Fort Peck, graduating from Glasgow High School Class of 1953. He was proud of accomplishing an Eagle Scout ranking. He was awarded a Navy ROTC scholarship, and attended Iowa State College, where he received his bachelor's degree in civil engineering in 1957. During college, he met Frances "Anne" Radcliffe, the soon-to-be love of his life, and the two were married on Dec. 24, 1956, in Moline, Ill.

Upon graduation, he was commissioned as an Ensign in the Navy and assigned to San Diego, Calif., where he served as an engineering officer on the Destroyer USS Bradford (DD-545), making deployments to the western Pacific Ocean. Completing military service, the family added two sons, Leith and Chuck, and returned to Fort Peck where he began working as a civil engineer at Glasgow Air Force Base. His next stop, with an additional family member, Sue, was Kalispell, Mont., where he designed roads for the Forest Service. He then decided that he wanted to raise his family in a better environment and purchased a farm in Glasgow. He became a farmer in 1965, shortly thereafter adding a ranching operation located near Tampico. During that time another Wimmer family member was added, Sandy. He became a real estate broker and later served as a real estate appraiser. He slowly transitioned to retirement, eventually spending time with family as much as possible.

He was passionate about fishing, bow hunting, golf, and most of all his wife, Anne, his kids and grandkids. He and Anne shared incredible life experiences from building their home in 1982, to traveling together on many adventures. Relationship with the Lord, Bible Study group and fellowship were key elements in his life. He was a member of the Glasgow Evangelical Church, The Gideons and Sunnyside Golf Course.

He was preceded in death by his parents, Earl and Dalene Wimmer; his wife, Anne; and his son-in-law, Walt Peterson.

He is survived by his four children, Leith S. Wimmer of Montana City, Mont .; Chuck Wimmer and his wife, Becky, of Havre; Sue Peterson of Glendive and her daughter, Katy; Sandy Nichols and her husband, John, of Escondido, Calif., and their sons, Andre, Quinn and Liam; one sister, Beve Finley of Bozeman; and three sisters-in-laws, Dor Sease, Margaret Radcliffe and Karen Molgaard and her husband, John.

Leith's last words to family were: "See You later Alligator," a true testament to his wonderful sense of humor, even at death's doorstep. We love you Dad!

A memorial service was held on Saturday, Aug. 12, at 3 p.m., at the Glasgow Evangelical Church.

Remembrances and condolences may be shared with the family at: http://www.silhafuneralhome.com.