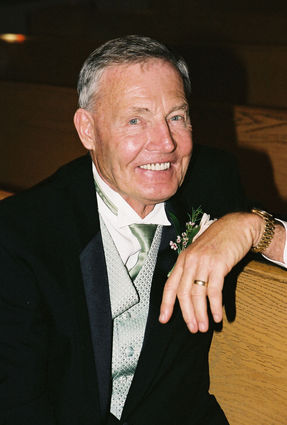 On Wednesday, July 5, 2017, with his children by his side, Daniel Roman Schellinger, 83, joined his beloved wife and other family members in heaven after complications from surgery. His smile, wit, and warm heart will be missed by so many people.

To accommodate as many family members as possible, funeral services will take place at 10 a.m. on Saturday, Nov. 18, 2017, at St. Richard's Catholic Church in Columbia Falls, Mont. Fathers Sean Raftis and John Miller will preside over the service along with Deacon Doug Courdier. A reception will occur at 12 p.m. at the Back Room Restaurant in Columbia Falls, one of Dan's favorites. The DeWitt and Tabler Funeral Home in Thornton, Colo., is in charge of the arrangements and the Columbia Mortuary in Columbia Falls, will help with the funeral arrangements.

Burial will occur privately at a later date. This burial will include the ashes of Faithe as well as Faithe's parents, Alvin and Leone Rasmussen.

He was born to Albert and Clara Schellinger in Glasgow, Mont., on Jan. 5, 1934. He spent his childhood in Glasgow with his siblings, Cliff, Bobby and Bunny, and he graduated from Glasgow High School. He also graduated with a business degree from Eastern Montana College. He enlisted and served in the Army, which was a continuing source of pride for him; he always watched the Army/Navy football game with great enthusiasm.

After graduating from school, he started working with his brother, Cliff, at Schellinger Construction Company in Glasgow, crushing gravel and building roads. While there, he met the love of his life, Faithe Rasmussen. They were married in Glasgow on Aug. 17, 1963, and had two children, Shawn and Shannon.

He and Faithe spent their early years with Schellinger Construction, frequently following the company across the state in their trailer. But when they arrived in Columbia Falls in 1970, they knew they had found their home. With Columbia Falls High School just across the street, Shawn and Shannon were able to walk to school and the whole family enjoyed watching Wildcat football and basketball games throughout the years. In addition to supporting his local teams, he was a lifelong St. Louis Cardinals baseball fan, which gave him great joy. But to balance things out, he was also a lifelong Cleveland Browns football fan, which cursed him with years of grief! He was also an active member of the Columbia Falls Booster Club and participated in many city council meetings. His beautiful yard was known throughout the town and he found great joy and pride in maintaining it.

One of his most treasured past times was the annual pheasant hunting trip to Lewistown with his brother, Cliff; nephews, Al and Randy; and close friends, Harry Cheff, Holly Larson, Wally Foster and Denny Foster. While Dan was very fond of these trips, Faithe was less than pleased cleaning all the birds he always brought back with him!

He retired from Schellinger Construction in the late '90s, but that did not keep him from spending many hours in the office visiting with his friends. In retirement, he and Faithe became snowbirds and spent their winters in the warmth of Palm Desert, Calif .; however, he always looked forward to his return to Montana in the spring well before Faithe did!

His deep love of his wife, Faithe, was an inspiration to all who knew him. He also spoke with much pride when discussing his children and grandchildren with his many, many friends. He had so many friends that his family joked there were never more than two degrees of separation from anyone he met in or from Montana. Montana was always a topic of conversation he loved to discuss with any stranger he ever met -the state of Montana has lost one of its strongest advocates!

He was preceded in death by his father and mother, Albert and Clara Schellinger; two siblings, Bobby Schellinger and Bunny Cerkovnik; and his wife, Faithe Schellinger.

For all of us, the loss of Dan will always leave a tremendous hole in our lives; but, after Faithe's passing, he really only wanted to be back at her side, hand in hand as always.