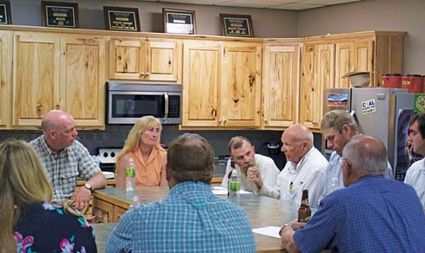 Rancher Larry Meyers told Gianforte at the onset of the meeting, "Every city on the Hi-Line is dependent on the Milk River. Without St. Mary's, the river would go dry," referring to the St. Mary Diversion Facility, which imports water from the St. Mary River Basin into the Milk River, sustaining the rivers' water levels. Meyers wanted to stress the dependance the region has on the diversion and its shortcomings.

Consensus among attendees was that the river would be dry if not for the diversion, which in 2003 came under review for its failing infrastructure. Meyers decried this failure saying they had, "put too many band-aids on the project," adding that infrastructure needed to be maintained. Comparisons were drawn with the Canadian irrigation and water systems just north of the border, which farmers referred to as "state of the art."

The St. Mary Diversion was the intro to the bulk of the meeting which focused on the severe drought conditions. Meteorologist-In-Charge for the National Weather Service in Glasgow Tanja Fransen briefed the Congressman on the current conditions of the drought, commenting that precipitation was one-third below normal for the year. Fransen pressed that the drought had not gotten a lot of attention from national agencies and news outlets, despite her office's efforts, due to its limitation to northeast Montana and northwestern North Dakota.

Fransen referred to the drought as a "flash drought," because of the speed in which the conditions occurred. Below normal precipitation only started having affects in mid-May and by July Fransen was considering labeling the drought as "exceptional." She was pushing to classify the current weather as a D4 drought, the most severe drought label available. She felt this was justified saying, "this was the driest we had been in 100 years, since 1918."

Attendees conveyed to their Representative in Washington that they were anticipating massive losses to local agriculture. Some had suggestions for the Congressman, such as Dennis Honrud's suggestion that the audit process for crop insurance claims over $250,000 be waived in light of the emergency. He cited the severe burden on the farmer, and the delay in receiving the needed relief. Other farmers felt the crop insurance process needed to be streamlined and made more efficient as farmers struggle to pay operating costs in light of the losses. Others put a finer point on it with local implement dealers anticipating tens of millions of dollars in losses as a result of the drought.

In addition to the discussion on weather, Gianforte heard from farmers on regulations and Farm Bill additions, with suggestions coming on efficiency, speeding up pesticide approval, removing driving time restrictions on farm truck drivers and similar regulations affecting agriculture. The North American Free Trade Agreement or NAFTA, and international trade were also discussed. Long-time farmer Don Fast emphasized the communities reliance on trade saying, "80 to 90 percent of what we grow is exported." Honrud pushed further saying, "this close to the border, Canada's our best friend(...) I have my own importer number to sell in Canada(...) We need to make it better, not trash our relationship with Canada."