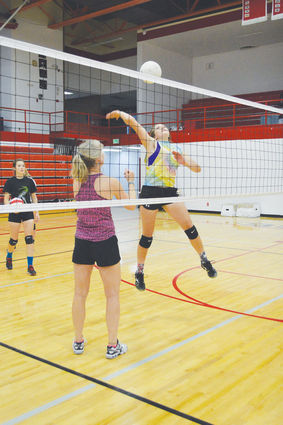 Rachelle Glaser jumps for the ball as GHS head volleyball coach Lori Dailey provides instruction. Glaser was one of nearly 100 participants in the recent volleyball camp offered by Dailey at the high school.

A four-day volleyball camp was held at GHS June 12-15, and was attended by nearly 100 campers. Glasgow's head volleyball coach, Lori Dailey, along with assistants Somer Hoerster and Natalie Hopstad, welcomed the campers to Scottie Gymnasium for skills instruction, laughs, and a very competitive playing atmosphere.

From novice kindergartners to experienced high schoolers, every age group was represented. According to Dailey, this year had the highest number of attendees ever. "Attendance continues to climb every year," she said. "I'm pleasantly amazed to be a part of the enthusiasm of our sport, both locally and across northeast Montana. I've always wanted to include kids from all over and that dream is continually becoming more of a reality." In fact, with girls from Glasgow, Poplar, Custer, Kalispell, Saco, Lustre, Hinsdale, Larslan and Richland all participating, the week has evolved into more of a Hi-Line camp.

The camp was a combination of instruction (technique and fundamentals) and competition. "The broader base of athletes that we welcome to camp has definitely improved the level of play for everyone," noted Dailey. "I see it during camp, again at open gyms and I'm hopeful that pre-season finds us ready to jump into season at a higher starting point."

With so many kids in attendance, Dailey expressed appreciation for the help she received from some of her players and alumni. "Thank goodness they were available to help coach at the middle school level," she said. "There were so many kids, I could never have survived without their enormous help."

Coach Dailey wanted to remind everybody that although the camps are over, open gym is still an option for high school girls. They will be held all summer on Tuesday and Thursday evenings, from 5:30-7 p.m.