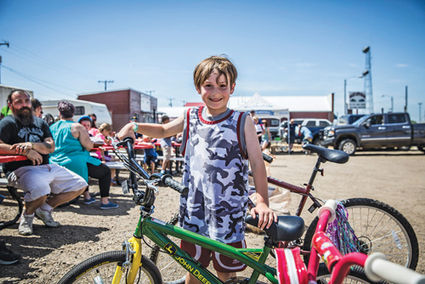 Seven-year-old Wheeler Damboise smiles for the camera while displaying a bike he won during the Tour de Prairie.

On June 4, Glasgow had its first bicycle rally, the Tour de Prairie. The summer bike tour of Glasgow enrolled 27 kids and 24 adults who rode their bikes along the tour's route, and afterwards gathered at the Busted Knuckle for refreshments.

Children who participated in the rally had a particularly good time, as the Glasgow Fire Department set up a fire hose on their ladder truck, making a giant sprinkler to cool the children down as they completed their laps around town. The Glasgow Police Department also set up the street between the Elk and the South Side Fire Hall so that the kids could cool down in a makeshift water park after their ride.

Children involved were issued bicycle licenses and also entered to win one of three bicycles. Winning bikes at the event were Axyiah Baadsgaard, Ashton Dolan, and Wheeler Damboise. The GPD also gave away bicycle helmets and they have some left over from the rally that can be picked up at their headquarters.

The event was organized by Tami Burke, with help from the Glasgow Police Department, FMDH, Glasgow Downtown Association, and the Busted Knuckle Brewery, to promote both bicycle safety and interest in the activity. The event was well received by the community. Several sponsors for the event contributed prizes and food and drinks to those in attendance. Burke added that the event success was the result of the community's team effort.