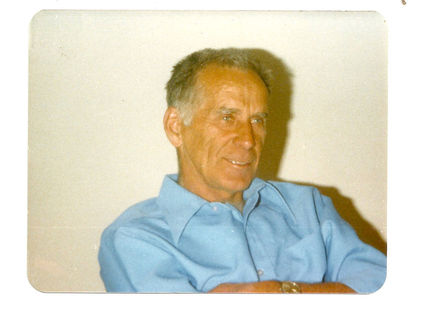 He served as a Marine in WWII on the Pacific Asian front and was never prone to tell war stories, but was proud to have served his country.

He helped his parents farm on their place in the Fuhrmann community north of Glasgow for many years, then later moved to Charlo, Mont., where his parents and a brother, Daniel, had acquired farms. He helped care for his aging parents and also purchased a farm across the road from them. During the end of his parents' lives and while they were in the hospital, he met Nona Miller, a nurse at St. Lukes Hospital in Ronan. Although Nona came with a built-in family, he was not scared and they got married. To that family of five children, they added one more daughter, Garnet, to their marriage.

He had twinkling, electric blue eyes that often spoke more than he did. He had a quiet faith that showed itself in all the construction he did on his kids' houses and all the ways he was a neighbor and friend to those around him. Mechanically minded, he could fix almost anything with an engine and his kids were very grateful for him keeping their cars running. He will be missed, but with the assurance of seeing him again.

Survivors include a sister, Hulda Mae Tade; four daughters, Patsy Betz, Deb Corrigan and her husband, Tom; Barb Stromme, Garnet Pirre and her husband, Jim; two sons, Mike Philips and Reuben Chong; along with several nieces and nephews; 10 grandchildren and one great-grandchild, who meant the world to him.

Memorial services were held in Missoula on Saturday, April 1, to celebrate his life.