By Lewis Reese
For the Courier

Bearcubs Did Not Disappoint at Season Opener 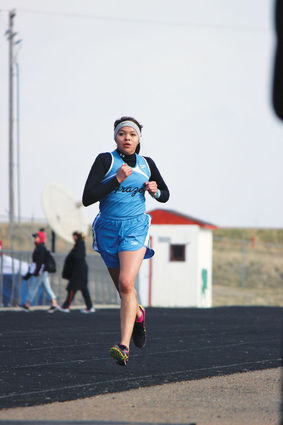 Sierra Summers, a junior at FHS, heads for the finish line during the 1600m run at the Glasgow Invitational Meet on April 1. Summers finished the meet with two new school records - one in the 1600m run and another in the 800m run.

The Bearcub track team met in the school parking lot during the early hours of April Fool's Day to share their thoughts on the performances they would give later that day in Glasgow, where they would be competing in their first meet of the season.

One athlete texted that they were just down the street and another texted that they would be a few minutes late. It was perhaps not the best start to the season, but one that set the tone for accountability of all track athletes. This year, as agreed on by the team, all athletes must ride the bus or they will not be able to participate in the meet that day.

The ride to the meet was clouded with uncertainty and rising self-doubt. Discussions mounted about being nervous and included questions like: "What if I don't perform well?" The head coach, Lewis Reese, spoke to calm the fears of the team. He reminded the team of the training they had received from the past head coach and principal of Frazer, John Wetsit, and the individual instruction from the new staff so far this year. Coach Reese calmed the athletes by reiterating that they should focus and believe in their training.

The bus pulled into Glasgow after the short ride from Frazer. As the students exited the bus, the cold westerly wind pierced through their warm ups. With the same force and effect of the cold wind, the realization that the Bearcubs had arrived to compete hit the athletes in the face and awakened the spirit of competition. The Bearcubs were prepared to honor themselves, their coaches, their school and especially those athletes that had paved the way for the records that would fall during the days competition.

The Bearcubs entered the Glasgow track facility and many people remarked, "They're here." There were murmurings of the freshman phenoms that were at Frazer this year, the transfer student that had not participated in varsity track for two years, the basketball stars now turned track stars, Korbin Cole, Jayson Jackson and Alex Rainingbird, and the newest member: that guy that can throw the shot put 50 feet. Many eyes were on Frazer and the performances that were undoubtedly going to be scrutinized at the conclusion of the meet. The Bearcubs did not disappoint.

The day would find that the Bearcubs would break four school records and set personal records in individual events by all but two of the athletes. Wyatt Miller, sophomore distance runner, was injured with cramps during the 1600m run and had to be removed from the remainder of the meet. His injuries are not serious and he will be able to return at the next meet.

Possibly the most remarkable events of the day were that the Lady Bearcubs would finish fifth out of over 20 schools with only three athletes performing. Truly an outstanding effort and outcome for the one junior and two freshmen that participated in the first meet of the year. What is especially worth mentioning is that another exceptional freshman, Cyrenna Standing, will be eligible for the next track meet and will only improve the Lady Bearcubs' chances of scoring higher for the rest of the season.

School records that fell were: the Lady Bearcubs' 1600m run and the 800m run, both records obliterated by Sierra Summers. The boy's discus record fell late in the afternoon when Jayson "Chubby" Jackson eclipsed the record by over a foot. Lastly, the shot put record was reset by the newest Bearcub, Dallas Reese, who performed under the greatest scrutiny as hordes of people came to see the guy that could throw over 50 feet. While Reese did not win the event, placing second to the current class B shot put leader from Harlem, it did set up the intrigue for the rest of the season. The two athletes are currently the best throwers in their respective classifications and hold the fifth- and sixth-farthest throws made to date in the state this year for all classifications. The two will be competing head to head at many events this year and the competition will be exciting as the season plays out.

Personal records were also set by many of the athletes. Freshman Julia Smoker achieved a personal best in the 200m run and sophomore Alex Rainingbird posted personal bests in the long jump and the 200m run. Freshman Mya Fourstar long jumped her way to a new personal best while sophomore Wesley Weston set a new performance record for himself in the discus. Junior Jayson Jackson set personal bests in the discus and the shot put where he improved by over two feet. The performer of the meet, who provisionally qualified for the state meet and will be representing the Bearcubs in Missoula, is senior Dallas Reese who threw the shot put 50'9". If he equals that effort in Missoula, it will be a new state class C record and put the Bearcubs in the record books for years to come.

Regardless of how the rest of the season plays out, the Bearcubs have provided an amazing opening act of what is a much anticipated play performance of the Bearcub track and field team of 2017. We can only hope it will continue all the way to the state meet to be held in Missoula Friday, May 26 and Saturday, May 27.

The team has already found the security and support that comes from track participation and, regardless of what others may do from other schools, the Bearcubs will stand by each other and cheer like it is the Olympic finals.