By Amy Nelson
The Courier 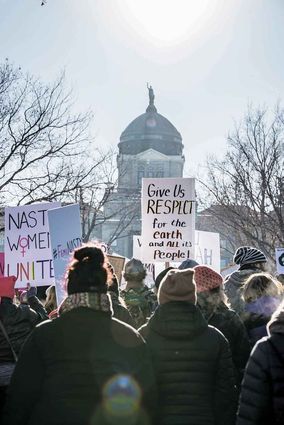 Women's March attendees gather near the captial building on Jan. 21.

I had the opportunity to attend the Montana Women's March on Jan. 21 in Helena. Going into this march, I thought this experience may be the most important thing I have ever participated in. After reflecting on the experience, I now believe my thoughts to be true.

This march was held in coordination with marches all around the nation and in different countries. March organizers and supporters estimated that just over 5,000 people would attend, but these expectations were far exceeded as an estimated 10,000 men, women and children from across the state attended.

Attendees swarmed the Capitol building for a near four hours, listening to inspirational speeches, listening to performances of song, and watching performers dance. Men, women, and children carried signs and spoke their opinions. Although many perceived the Women's March to be about women's rights and our current government administration, it was about so much more.

The march signaled a common desire for solidarity and change in our government policies. Women, children, men, LGBT members, Native American tribes, Muslims, Jews, the disabled, the sexually assaulted, and everyone bold enough to fight for human rights was heard at the march. The most stunning part of the march was that I did not see one sign of hatred or violent resistance. There was not one fight, not one arrest, nor any violence of any kind. Never in my life have I been surrounded by so many kind and considerate people.

I truly believe that we live in a beautiful state and country where everyone's voice can be heard. I believe that acts of solidarity such as this are what make a difference for human rights. The people of Montana who attended the march did make a difference, as the Montana Historical Society collected signs from the march to include in their archives.

There is nothing more inspirational than watching people passionately stand up for what they believe in. This march reassured my belief that there is more good than evil in the world and maybe someday, with a lot of hard work, equality for all will be achievable.