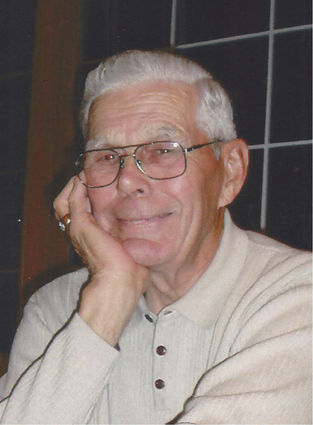 Harold Raymond Sethne, age 91, left this earthly world for his heavenly home on Friday, March 25, 2016. He passed away as peacefully as he lived, surrounded by his daughters.

A service celebrating the life of Harold will be held at the First Lutheran Church of Glasgow on Saturday, April 2, at 11 a.m., followed by burial at the Highland Cemetery in Glasgow.

He was born in Glasgow, Mont., to Norwegian homesteaders Oscar and Clara (Nordrum) Sethne on Aug. 9, 1924. His parents and siblings lived on his uncle Rangvald's homestead in the Fuhrman community. In first grade he attended the North Fuhrman School and at age six his family moved to Glasgow. The family spent their weekends and summers at the farm. After graduating from Glasgow High School, he attended college in Bozeman. As his father's health declined, he returned to the farm where he began his long career of tilling the land and consolidating family homesteads into the Sethne farm.

While a patient at the Glasgow hospital, he met a young nurse named Kathryn (Kitty) Sedlacek, and on Oct. 12, 1947, she became his nurse, wife, and helpmate for life. They continued to farm and raised two daughters, Karen Dehn and Janet Gabriel. Their love for the land continued on to the next generation.

During the 70 years he operated the Sethne farm, he served on the Glasgow Hospital Board, Valley County Election Board, and Lutheran Church committees. He was known as a trusted neighbor and loyal friend.

He and Kitty became Arizona snowbirds and golfers in 1972. These years in the warm sun produced close friends and fond memories. However, they always looked forward to returning to the farm to watch the grain grow and turn golden. After Kitty's passing in 2000, he continued to winter in Mesa and return to the family farm until his 90th year.

In 2014, he relocated to Sheridan, Wyo., to be closer to family. The Green House Cottages in Sheridan became his new residence. He was always grateful for his family, the farm life, Arizona living and The Green House.

He was preceded in death by his wife, Kitty; two brothers, Byron and Vernon Sethne; and one sister, Garnet Dahmer.

Memorials may be made to the Valley County Pioneer Museum, Glasgow, MT. Online condolences may be written at http://www.championfh.com and http://www.bellmortuarymontana.com.

Local arrangements are under the direction of Bell Mortuary of Glasgow.