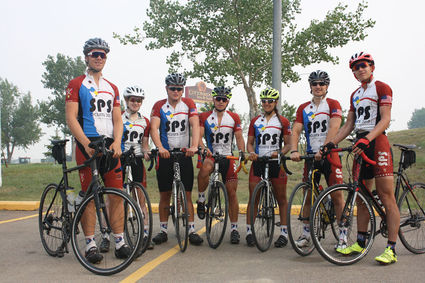 On June 28, eight weary bicyclists pedaled their way into Glasgow. The students, from St. Paul's School (SPS) in Concord, NH, are biking across the northern US and parts of Canada to raise money and awareness for Ride 2 Recovery.

The latter company is dedicated to helping veterans suffering from PTSD and Traumatic Brain Injury. Their 50-day, 3,800 mile journey began in Anacortes, WA, and will end at their school campus in Concord, cycling anywhere between 70 and 120 miles a day.

Taking in a day of rest in Glasgow, they enjoyed the simple luxury offered up at the Cottonwood, reveling in a real hotel with showers and beds rather than tents and sleeping bags.

Mayor Becky Erickson and the VFW played hosts on June 28, allowing the bike riders to visit with local veterans over a sloppy joe potluck. Mayor Erickson said, "It was really fun to meet these kids and visit with them. The veterans had a lot of good questions for them, and the kids stressed their concept of teamwork and how that is helping them on this journey. I'm very thankful to the VFW for hosting them."

Monday was spent taking in Fort Peck Lake and the Dredge Cuts. The Courier contacted some SPS cyclists to see how they spent their day off in Glasgow. "We just went to one of the dredge places [sic] and kind of laid in the shade," replied Missoulian Jade Thomas. "Now we're eating pizza at Eugene's."

The group was on the road early Tuesday morning, leaving in the smoke blowing in from the Canadian wildfires. Noting that it would be a pain to ride in, they also expressed hope that it would keep the temperatures down.

So far, the group has raised $87,000 of their $100,00 goal. This number does not reflect funds raised in the communities they have spent time in, such as the donation coming from Glasgow's VFW.

The SPS Cyclists Ride Across America is a special event for Ride to Recovery. While none of the participants have family members who are vets or benefitting from Ride 2 Recovery, their school has a history with the charity. The students came together and agreed that this was a noble cause worth supporting. This is the third time students from SPS have embarked on this journey.

For more information or to donate, visit spscyclists2015.com or ride2recovery.com