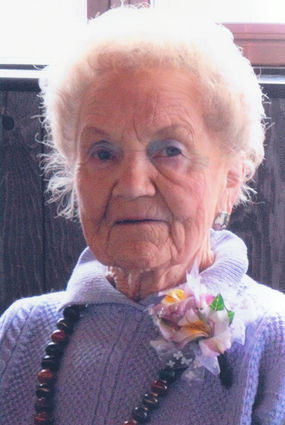 Cremation has taken place and a committal service will be held at a later date.

She was born on March 20, 1922, in Stillwater, Minn., and completed her high school education there. She received a two-year teaching certificate from Winona State College for rural schools. In 1941, war was declared, and she headed to California.

She was not "Rosie the Riveter," but obtained a job with Union Oil 76 and was sent to Beverly Hills to work in a full-service gas station. One day her assignment was to pump gas and on that day Harpo Marx ran over her right foot. Another day, Horace Height, who at his musical height, celebrated the one-year anniversary of the war and invited her to be on the radio coast-to-coast in a skit with a role of being hassled by a guy. All she remembers saying was, "Get back in the car squirt."

Back to Minnesota while teaching sixth grade, she was introduced to the ancient world and early European history. She vowed that someday she would visit these places, and in 1983, along with her daughter, Susan, went to Greece and cruised the Mediterranean Sea, touching Egypt and the Holy Land. It was during this trip she rode a camel and never tired of telling the camel ride story. In 1985, she spent five weeks visiting the wonders of Europe from London to Amsterdam. Her dream came true.

With the war over, she married her childhood sweetheart, Richard "Dick" Lee, and in 1950, they adopted their daughter, Susan.

After the war her husband, Richard, attended the University of Minnesota pursing a degree in Fish, Wildlife and Game. After his graduation in 1949, there were no jobs due to the Korean War and the government changed the requirements for FBI agents. He qualified, was accepted, and they were transferred to Morristown, N.J., in 1954. When they arrived, they immediately applied to adopt a boy and got a son named David.

While in New Jersey, she began teaching and attended classes at Newark State working toward her degree. Her philosophy of education was, "I do not teach the subject, I teach the child."

In 1957, she became pregnant and Brian was born, rounding out the family.

There was one rule the family kept. The first two weeks in July they left town on vacation. They did a lot of tent camping up the East Coast and into Canada and had many fun adventures during these annual trips.

In 1970 the family moved to Glasgow. The same year, she received her teaching degree. Upon moving to Glasgow she took up hunting, fishing and golf. She was fortunate to have so many younger friends from her bridge clubs and golfing experiences. She said that this kept her "young at heart."

She became "mom" to six girls who worked at the Glasgow Flower Shop. She made them fancy lunches for their birthdays. She hand-printed recipe books for each "daughter" that included many wise and humorous sayings. Taste of Home's Healthy Choice Magazine printed one of her recipes for Honorable Mention.

She visited her daughter in California and her son in Wisconsin often, enjoying fine dining, entertainment and all the attractions found in each state. On one trip she and her daughter, Susan, took a hot air balloon trip over the Napa Valley, and while disembarking, the balloon got away with only Harriett in it, and the crew had to pull her back to earth. It was a story told many times.

She was active in the First Lutheran Church, including writing and producing programs for WELCA, bulletin boards, informational programs and visiting shut-ins to have tea.

She was a Community Concert Board member, treasurer and president in the mid 80s. She played in both Morning and Evening Golf leagues until she turned 80. During that time she was in charge of the Ladies' Morning League and continued playing until age 85.

Her volunteering and organizing skills were noticed and often times resulted in her becoming president of several organizations. She truly enjoyed all of her friendships and living in Glasgow for 45 of her years.

She was preceded in death a sister, Miriam; a brother, Roland, who was killed while serving in Korea; her husband of 48 years, Richard "Dick" Lee, who passed in 1991; and a son, David, who passed in 2012.

Survivors include a daughter, Susan Priest and her husband, Robert, of Ione, Calif .; a son, Brian Lee and his wife, Denise, of Watertown, Wis .; a daughter-in-law, Carol Lee of Glasgow; three step-grandchildren; and several nieces and nephews.

Memorials can be made in her name to the Children's Museum and Valley View Aviary Maintenance Fund. Tributes of sympathy maybe left at http://www.bellmortuarymontana.com.

Bell Funeral Home of Glasgow is in charge of arrangements.