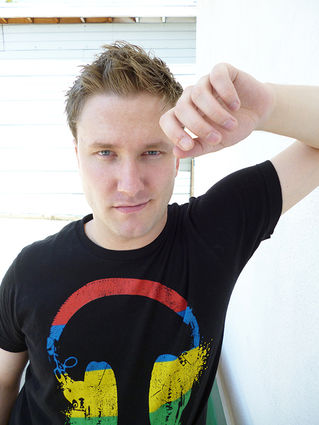 Tyler Schuelke / For The Courier

Kenyth Mogan: He's gone from Glasgow to Disney World to Los Angeles and the release of a five-track EP.

Seven years after moving to Los Angeles, Glasgow native Kenyth Mogan is taking his first steps into the musical spotlight with the release of his debut EP, “Fall Apart.”

The five-track EP consists of two covers and three original songs with the title track co-written by producer Tony Rodini and Mogan. Other songs on the EP include “One Worth Losing,” written by up-and-coming pop singer Todd Michael Shultz, and a cover of Julie Brown’s 1987 novelty hit “I Like ‘Em Big and Stupid.”

“I had a good time growing up in Glasgow,” Mogan told The Courier. “It’s a great place and most of my family is still there. I graduated in 2002 then went off to Missoula for college. I worked for Disney World in Orlando then moved out to LA the day after I graduated college.”

In the summer of 2007 his first book, a manga-style graphic novel called “The Phoenix Chronicles: Awakenings,” was published and he did a few minor film and web series roles.

“I came back into music after Todd Michael Schultz (another pop singer) introduced me to his producer, Tony Rodini (from the band New Country), and everything just kind of fell into place,” Mogan said. “I’ve been very lucky in the fact that I have people like A’me Lorain (a singer who had a hit in 1991 with ‘Whole Wide World’) and Romi Dames (an actress in ‘Hannah Montana’) who have really stood beside me and encouraged me with trying all this out.”

The EP came out on Oct. 1 and can be ordered through http://www.KenythMogan.BandCamp.com. The first single, “Fall Apart,” has gone out to stations all over the country, and has been played on KLTZ, which Mogan said is “awesome.”