Their Plan: A New Look With 120 Condominium Units Becoming Townhouses 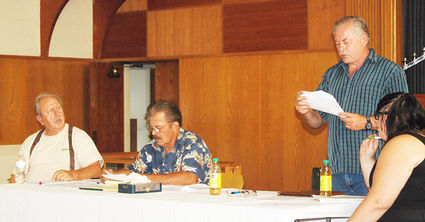 Pictured at a meeting of St. Marie unit owners in the base chapel on Aug. 28 are, from left, Merrill Frantz, Terry Lee, Ron Frantz and an unidentified woman.

The month of August has seen a series of meetings at St. Marie and a takeover attempt by a group whose core is four people who arrived from Washington State last summer, DTM Enterprises LLC. DTM partners have stated they want to renovate and sell units at St. Marie. They want to take a section of 120 units out of the condominium and turn them into townhouses, a different form of ownership in which people own the building and the land under it.

The latest meeting was one the DTM partners held for property owners in the St. Marie chapel on Aug. 28, which was attended by about 60 people. They told the residents they represented a majority of the owners at St. Marie and being dissatisfied with the way things were being run, they had abolished the current covenant and dismissed the board of directors of the St. Marie Village Association with thanks for their years of effort. They introduced the three people who form the interim board of their new organization.

This is not the first time developers have come to St. Marie and attempted to wrest control from the Village Association, which represents all the owners, and the St. Marie Condominium Association, a group of about 250 owners. Deann Ketchum, the office manager of the Condo Association, wished to make no comment on the current situation.

The recent events started at the annual meeting of the St. Marie Village Association on Aug. 9. A DTM partner, Merrill Frantz, was nominated for election to the board of directors but he was ruled ineligible because some of the properties he represented were in arrears on village fees. Terry Lee, another DTM partner, presented a proxy for 365 votes from a Missoula man named Mike Mitchell, who has formed New St. Marie LLC. Lee said he had been told that they were valid and could be voted, but he too was ruled a delinquent owner for other properties DTM owns.

That prompted an Aug. 23 meeting of nine owners at St. Marie. The purpose of this meeting was to abolish the protective covenants amended in 1992 and revert back to the original 1988 proteCctive covenants of the St. Marie Village Association, and to nominate three interim directors for the “new” Village board of directors. The meeting was not posted in advance and all owners were not notified.

The Village covenant was amended in 1992 to prevent those who don’t pay their bills from voting and managing the board and to allow only owners in good standing who pay their bills to vote, hold a directorship and manage the Village Association.

Under the covenant governing St. Marie, one unit owned is one vote in the village elections. Three of the owners at the Aug. 23 meeting had a total of 643 votes. The nine owners present represented 664 units, 60 percent of all the units in St. Marie. Of those 664 votes, Lee’s 365 proxy votes made the majority vote. According to Lee, when Mike Mitchell paid back taxes to acquire those units, approximately $300,000 in unpaid Village fees were wiped clean by state law. That made those 365 units “in good standing.”

Now comes the owners’ meeting of Aug 28. A flyer was posted on each condo door knob announcing a Village owners gathering at 6 p.m. on Aug. 28 at the Town Hall. The group was denied use of the Town Hall for failing to state who or what the meeting for and not seeking prior approval, although the hall was not booked for that time, according to Lee. So the gathering moved to the base chapel, a large space with plenty of seating but no electricity.

Ron Frantz, a nephew of Merrill Frantz, led the meeting, with Merrill Frantz and Lee at his side in the front of the chapel. He said Article X of the Village Protective Covenants gave power to the owners to change or abandon the covenants by a majority vote, and this had been done by a majority of owners on Aug. 23.

“We filed the original 1988 covenants with the county recorder after the 1992 amended covenants were abolished,” he said.

Lee stated that owners, not members of a board, take precedence, and on that basis they moved forward. Merrill Frantz said that a new homeowners association had been formed. The interim board members were introduced. Donna Bruschi, who arrived from Florida 18 months ago, said she is a certified mediator. Anthony Hebert rents a unit. Diana Frantz, the wife of Merrill Frantz, recently became a licensed abstractor. The alternate member is Dwayne Knapp, who came to St. Marie with the DTM partners.

Ron Frantz said, “Our purpose is to include all owners and have the greatest freedoms and protect the rights of all owners. At the annual Village meeting Nilla (Hansen) got on the board with only 75 votes and a lot of people were disenfranchised. We were not allowed to use 365 proxy votes.”

“We owners are the bosses,” Merrill Frantz said. “The Village is our hireling. We will pay dues to them and we’ll instruct them what to do with the money.”

This reporter asked if a “roads special assessment” is in the future. Ron Frantz said there will be no drastic changes.

“What gave you folks the legal power?” Owen Childers asked. He wanted to know if a lawyer was used.

The answer was “the county lawyer.” Asked about this later, Valley County Attorney Nick Murnion said he spoke of the filing process with the courthouse but gave no legal advice on the Village Association Article X amendment.

Lee said that he was a Spokane builder but was familiar with the Montana Unit Ownership Act. In 2011 the Legislature changed this law and allowed condos to be converted to townhouses. Legal action would be required first to quiet the title on the units.

Lee and Merrill Frantz said they wanted to create a township or or city without interfering with the condo, and several people in the audience agreed.

Lee gave the definition of a condo and stated that St. Marie Development Corp. owns all of the land, worth some $3,500,000. That comes to $5,000 per unit. Lee claimed that in the creation of St. Marie Village, Pat Kelly, the original developer, never transferred the land from Valley Park Inc. to all condo owners. just the use of it.

A couple of longtime residents and former condo board members reacted loudly and angrily to the speakers and walked out. Bill Silver was quite expressive in saying the he’s been here in St Marie for 21 years and non-tax payers want to take over and he doesn’t like it. Hank Endler stated that Paragraphs 4 and 6 of his American Title and Trust Insurance as well as his trust deed say he owns the land. He added that the county taxes him for the land.

Ron Frantz said that the “owner of the dirt” is yet to be determined. Merrill Frantz said a quiet title action must be done to find out who owns what. “Nobody, but nobody, knows what’s going on at St. Marie,” he said.

As the meeting went on, the chapel grew dark and people began to leave. After about two hours, Ron Frantz called for another meeting within 60 days.