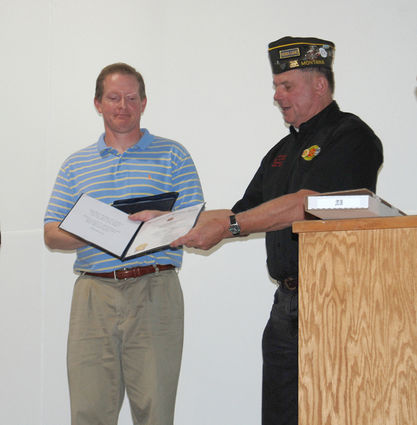 Dr. Brad Persinger receives the VFW Montana Teacher of the Year award from Art Widhalm at the Memorial Day ceremony in Glasgow.

Glasgow’s high school and middle school music teacher, Dr. Brad Persinger, has been honored as the VFW Montana Teacher of the Year. The award was publicly presented by the VFW’s Art Widhalm at this year’s Memorial Day ceremony.

“Brad epitomizes the definition of citizenship,” then-GHS Principal Marj Markle said in her letter of nomination. “No matter what day Veterans Day or Memorial Day fall, Brad is there to volunteer his time and wonderful music ability at their functions.”

After Persinger has directed the GHS Band at a patriotic ceremony, he often finishes the event with a haunting rendition of “Taps,” either solo or with another trumpet.

He works with students who want to compete at district and state music festivals. With his knowledge, he enables students to choose music that is appropriate for them and the contest. He added classes in guitar and jazz band when students showed an interest.

When the Scottie band needed to replace their worn uniforms, Persinger campaigned to raise money for new kilts.

In addition to his school duties, Persinger performs in and co-directs the Scobey Prairie Symphonette and performs in the Scobey Big Band. He also volunteers for the Fort Peck Summer Theatre, groups in Great Falls and high school plays. He sings in local church choirs and Christmas programs.

Persinger began his career in Kansas in 1989, teaching both instrumental and vocal music to middle school through high school students for three years. He taught a year in Colorado, then went back to college full-time to earn his doctorate from the University of Northern Colorado.

In 1998 he moved to Montana to teach K-12 music in Stanford for three years. He has been in the Glasgow School District since 2001.

Fellow music teachers in the school district and students were among those writing glowing letters of recommendation for Persinger, always mentioning his readiness to help others.

Melissa Unger, who played in his band for five years and is now studying music at the University of Montana wrote, “Mr. Persinger has always encouraged us to play in the band at our local Memorial and Veterans Day services. He is very passionate about the band engaging in these services. Seeing how he committed himself to practice with us select few, we were encouraged to participate. He never forced us to attend the ceremonies, but I noticed each year our numbers increased. His enthusiasm for supporting veterans was apparent and people in the community would always thank him for bringing the band.”