Marine Walking Across U.S. For The Fallen 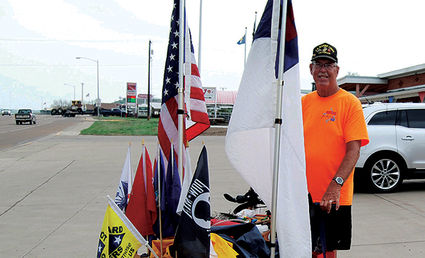 Chuck Lewis stops at the VFW Post on his way into Glasgow on Saturday, more than 900 miles into his cross-county Walk for the Fallen to raise $50,000 for wounded veterans.

It’s going to take six months, but Chuck Lewis is walking the 3,300 miles from Everett, Wash., to the Vietnam Memorial in Washington, D.C. He still looks like the Marine sergeant he was in 1974 and he is fiercely proud of the flags that deck his three-wheeled cart, big American and Christian flags, plus smaller ones of every branch of service and the black POW/MIA flag.

Lewis calls himself Montana Honor Guard in his roles as teacher, speaking to schools and groups about patriotism and honoring the flag, and fundraiser for wounded veterans and the families of the deceased. Walking for the Fallen is his one-man campaign to raise $50,000, which he will give to selected organizations to benefit injured veterans of Operation Iraqi Freedom and Operation Enduring Freedom.

He made a presentation at Hinsdale School on Friday, walked to the rest area west of Glasgow and camped overnight, and arrived in Glasgow Saturday around 3 p.m. That’s fairly typical of the schedule, leave about 8 in the morning, stop about 10 to fire up the one-burner stove for breakfast, continue until he reaches the next town or camp site, reconstitute something freeze-dried for supper. Keeping a steady pace of about 3 mph, he is averaging 22 miles a day. Only about 2,300 miles to go.

“I haven’t hit any deer yet, so that’s a plus,” he said humorously.

A friend at the Ronan Post Office had arranged for him to spend the night with relatives in Glasgow.

He travels light, with a tent, a sleeping bag, a couple of changes of clothing, bottles of water. He may be moving in the most basic way but he carries a high-tech solar panel to recharge his cell phone. Eventually he will have to mail home some of the gifts he has received along the way, especially on reservations in Montana, where he has been warmly received. He has a beaded dream catcher, a tribal patch, a tiny buckskin keepsake pouch, and for good fortune a medicine bundle of painted sticks, dried sweetgrass and a feather, tied with colored strips of cloth.

His blog reveals that people constantly stop on the road to talk to him. They write him afterward and wish him well. They invite him home for the night, feed him and put him on the road in the morning. They call their friends on the road ahead and arrange places for him to stay.

Lewis had planned to begin his journey on April 1 but the date made people think his plan was a just a joke, so he moved the date back one day and left on Easter Sunday. He said doing that has made everything work out. He missed a snowstorm on Stevens Pass by one day. In Bonner’s Ferry, Idaho, he walked for a while with Mike Ehredt, a man who inspired him by running across the country placing a flag at every mile marker with a name on it for a soldier who had died in Iraq, and the next year did it for those in Afghanistan. A truck pulled up. The couple had a son who had been killed in Afghanistan. Ehredt had placed a flag for their son and with his smart phone showed them where it was.

“It was a spiritual thing,” Lewis said. “I moved the trip one day. All the hours spent, there was a small window of time where we were all in the same place at the same time. It’s really kind of amazing.

“Young men and women come home from combat. They are the finest trained military we’ve ever had. They have purpose. They rely on their brothers’ and sisters’ trust because today’s enemy has no uniform. Then the soldiers come home. Life is so fast and furious. The economy is bad. They don’t know who to trust. The only thing we have left is hope. Christianity. It’s how our government was founded and now people want to take the pledge of allegiance out of school. They want to take down the statue of Jesus at Whitefish. What’s left for these young men and women? Some of them aren’t really strong.

“There’s not a way for a Vietnam vet to communicate with them. Their war is different. I don’t worry about it. I can walk. I can raise money for those groups that can help the wounded and their families back into society.”

Lewis was in the Marines from 1970 to 1974, mostly working on aircraft. After that he earned a degree in electric technology and spent 27 years doing research and development at the Naval Air Warfare Center at China Lake, Calif. He and his wife, Linda, raised six children. He spent about eight years in the Navy Reserves. In 2001 they moved to Ronan, where he joined several veterans organizations and started a newspaper, the Valley Journal.

Lewis could see some things that needed doing, but it’s hard to move groups that have their own comfortable way of doing things. Telling his story, Lewis shrugs.

“I’m not a motivational speaker,” he said. “I lead by example. That’s what this walk is all about.”

Lewis has to be in Culbertson by Saturday to meet his ride to Sidney, where he is scheduled to give the keynote address at their Memorial Day celebration, then return to his journey on U.S. 2. A friend will bring his Marine dress uniform for the occasion.

To wear the uniform, Lewis is always groomed to military standards, so he got a haircut at Eternal Beauty, Ink in Glasgow on Saturday. He made the appointment by cell phone from the road, on the recommendation of a man who stopped to talk to him. Lisa Mavity said she used to work in Billings at a location right in the middle of three recruiters’ offices. She knew just how he wanted his hair cut. She quietly cut and snipped as he talked to other people in the shop about his walk. A customer was just about to send her son off to Kuwait, and her 90-year-old father was going to take the WWII veterans’ Honor Flight to Washington in September.

After Lisa finished, Lewis fished his wallet out of a zippered plastic bag and tried to pay her. She refused his money so he gave her a hug.