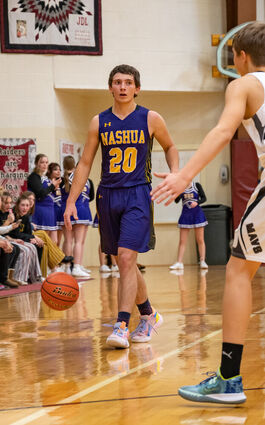 Nashua's Kevan Viste brings the ball downcourt while his teammates set up the play against the North Country Mavericks Dec. 15 in Hinsdale. Viste hit two three-pointers in the Porcupines' 58-36 win on the road.

Nashua's boys basketball team split their games this past weekend. The Porcupines defeated the North Country Mavericks 58-36 in Hinsdale Dec. 15 then dropped a 71-22 contest to the Lions in Lustre Dec. 16.

Nashua stood even with North Country at...