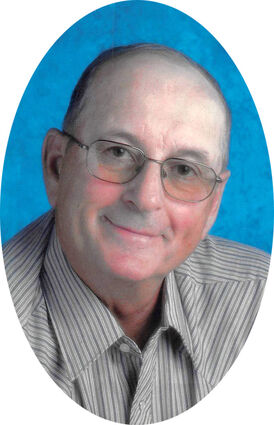 Funeral Services will be 11 a.m., Thursday, Jan. 5, 2023, at First Lutheran Church in Glasgow with Pastor Scott Kiehn officiating, burial will follow at Highland Cemetery. There will be a reception at Sam and Jeff's following burial.

Bob was born on March 26, 1939, in Glasgow, Mont., to Robert Sanford Cotton and Marie (Wilson) Cotton. He was the fourth of six siblings. Bob's early years were spent working on the family farm alongside his parents and siblings. Besides working on the farm, he enjoyed many activities such as his involvement in 4H. Bob received his education at Glasgow Public Schools and graduated in 1957. During his years in high school, Bob enlisted in the Army Reserves. Later on, he joined the Army National Guard. After graduating, he attended MSU Bozeman graduating in 1967 with a degree in Industrial Arts. During his time at Bozeman, he met Barbara Lee Steele whom he married on April 10, 1968. They returned to live on the family farm west of Glasgow. Soon they were blessed with four children: Collette, Elissa, Lane, and Joanna.

Bob spent a short time teaching at the Glasgow Air Force base until the base was closed. This provided him the opportunity to work alongside his dad and brother, Jim, on the family farm. In later years Bob took on a second job working for the Glasgow School District, first as a substitute bus driver and then as a full-time route driver for 26 years up until his passing. Bob was a member of the Glasgow Elks Lodge No. 1922 for 49 years and was named Exalted Ruler in 1984. His children remember fondly the many Christmas parties attended at the Elks Club.

Bob cherished his companion, Kathy Fuhrman. They had many years chasing stubborn cows together even on the coldest days. They enjoyed catching up with old friends at reunions and could often be seen together dining at their favorite restaurants such as the Oasis and Eugene's Pizza. Bob looked forward to his almost daily breakfast at the Oasis, he enjoyed conversations with the staff and patrons and made many close friends there. Bob had many friends throughout his life that were special to him, you could always count on his playful banter to put a smile on your face. Bob enjoyed attending the VFW Steak Fry, especially when he was waited on by his grandchildren. He was proud of his grandchildren and would attend their concerts and games. One of Bob's favorite things to do in the summer was partaking in the NE Montana Fair to proudly watch his grandchildren take part in 4H, watch the derby, and enjoy concerts with his children and grandchildren. He loved to dance and could show everyone up on the dance floor with his impressive moves. Bob's true love was the farm and ranch. He had many good memories working on the farm and roundups alongside family and neighbors.