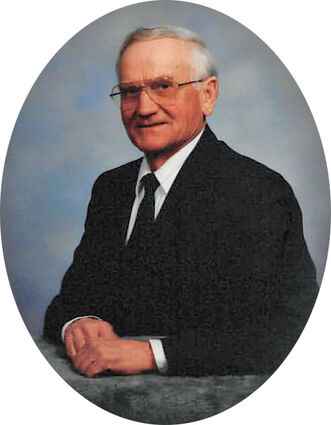 You may stop by Bell Mortuary to pay your respects to Harvey, Friday, Dec. 9. Family will receive friends Sunday, Dec. 11, from 4 to 6 p.m. at Bell Mortuary, Glasgow.

A private family burial is planned with a celebration of life planned for June 2023.

Harvey was born on June 5, 1930, on the Fast Family homestead in Lustre, Mont., to Peter and Aganetha (Ratzlaff) Fast. Harvey was the youngest of nine children (six living and three died in infancy). The older siblings had gone to choir practice and upon returning home, their father announced they had a "new baby brother" delivered by Mrs. J.J. Baker, the local midwife. Times were hard and that made an older sibling say "we have enough work already!" This was the beginning of the terrible dust storms and drought of the 1930s. Harvey attended Star School half a mile from the homestead for one year before it closed in 1937. The closure was due to the enrollment dropping by seven children, when the cousins from the Abe Fast Family made the move back to Mountain Lake, Minn. He then finished his grade school years at Todd Lake School four miles from home. Harvey received Jesus as his personal Lord and Savior at a young age after attending an evangelistic meeting and was baptized in a pond close to Todd Lake.

Harvey's dad had purchased a house from the Fort Peck Dam project and had it moved to Lustre where it became the family home. One chore he had every morning before school was digging a cistern by hand in the basement of the house by filling a bucket with dirt so his mother could then pull it up with a rope. He also attended Glasgow High School which required staying with his Aunt Helen Ratzlaff and later boarding at the Waitschies apartments, graduating in 1948.

Harvey married Gladys Funk on Oct. 28, 1951. They were blessed with four children: oldest daughter Shirley, followed by identical twin daughters, Jean and Joan, and son Warren. Harvey was a member of the Lustre MB Church. He and Gladys gave generously to missions and supported many missionary families through the years. He served faithfully on various church boards and committees. Other areas in the community where he served were on Schmeckfest committees, Mennonite Disaster Services (MDS) and both the Lustre Grade School and Lustre Christian High School boards. He was also very much involved in church and school building projects which included working many hours on the new LCHS gym and dorm. He also enjoyed helping each of his children whether building or remodeling their homes. Harvey was a member of the LCHS Foundation Board when it was founded. He also served seven, three-year terms on the Northern Electric board and was on the state MECA board receiving awards for his service to both.

In 2010 Harvey and Gladys moved to Glasgow. He left the homestead where he was born and retired from farming and ranching, the life he loved. Adapting well to town life, he found contentment and loved to welcome friends and neighbors, his children, grandchildren and great-grandchildren to their home. He continued going back to the farm helping out when needed, running errands and keeping the farm shelter belts in good shape. He enjoyed reading, checking in on Gladys' quilting, gardening, and working on projects in his little wood shop. Harvey donated his time at the local food bank and enjoyed his afternoon coffee time with friends. He and Gladys faithfully attended Glasgow Evangelical Church. In October of 2021 they celebrated 70 years of marriage.

As a family we wish to give a heartfelt thank you to the staff of Prairie Ridge and Valley View Home for the loving care they gave both Harvey and Gladys in recent years. Their dedication is appreciated.