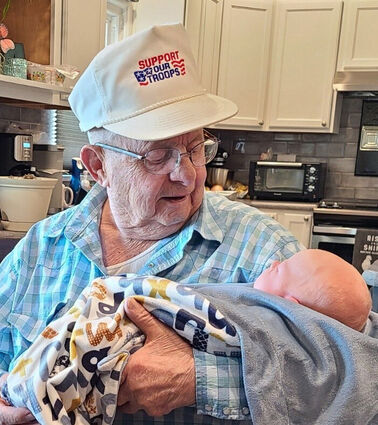 On the evening of Tuesday, Nov. 22, 2022, Buck passed away peacefully of natural causes. His family was lucky enough to spend the day with him and have an opportunity to say goodbye. Buck was 89 years old.

Buck went to school in Hinsdale, Mont., and graduated in 1952. Over the years, he rarely missed a class reunion and the opportunity to visit with old friends. After graduation, he enlisted in the US Army and served in the Korean War. Buck was honorably discharged and returned to the family farm.

After a few years of this, he moved to Jerome, Idaho, with his older brother Art to work as a fireman. He then returned to Montana and moved to Conrad, where he met his future wife, Kathleen Alice McIntyre. They were married Nov. 27, 1964, and their only son John Kevin was born in 1965.

When John was nine, Buck and Kathy packed up and moved to Augusta where Buck joined his friend Virgil Venetz and together, they opened A&V Garage. He and Virgil ran the shop for many years until Virgil had an opportunity to return to his family farm. During this time, Buck and Kathy were very active in the Augusta community, introducing the first ambulance service and providing medical assistance and transport to those in the Augusta area. Buck also served as a Special Deputy for the Lewis & Clark County Sheriff's Office at no cost to the County. Buck continued to serve the Augusta community in many ways until he moved to Helena, Mont., in 2019 to be closer to his son and family.

Kathy was the love of Buck's life but died in 1992. He was also predeceased by his brothers Art, Albert (Buster), Fred, Johnny and Jerry; and sisters Grace, Bernadine, Darlene and Marie.

Buck is survived by his son John and John's wife Brooke; grandsons Ian (Hannah) and Nicholas and granddaughter Taylor (Jacob); great-grandsons Cameron and Chase Gambill-Mann and Kane Carter Amestoy. He is also survived by his sister Joan Josephine (JoJo) along with numerous nieces, nephews & cousins.

Buck was an avid fisherman and asked John to take him out right up to his last days. He also loved to hunt, and it wasn't unusual to find him dancing at the Moose, Eagles or Elks on a Saturday night. Buck was also known for his jokes and never hesitated to share one, even in mixed company. He was most proud of his son John and grandkids, taking every opportunity to talk about them to anyone that would listen. He will be missed by each one of us.

A celebration of life will be held in the spring. The family would like to thank Misty, Christa, Dustin and the Stone Meadow group for the great care and the St Peter's staff for making his final hours peaceful.

Please visit http://www.aswfuneralhome.com to offer the family a condolence or to share a favorite memory of Buck.