By Pierre Bibbs PCN
For the Courier 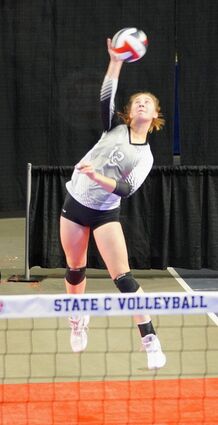 Heidi Cummings / For the Courier

Mattea McColly fires off a serve during a Mavericks' game at the All-Class State Volleyball Tournament at MSU Bozeman this past week. The Hinsdale senior had four aces, six kills, three assists, 19 digs and three blocks in North Country's five matches.

The 2022 North Country Mavericks volleyball team added to their history making season by not only competing at the State C Volleyball tournament for the co-op's first time, but earning a third place trophy at the 2022 event after going 3-2 last we...