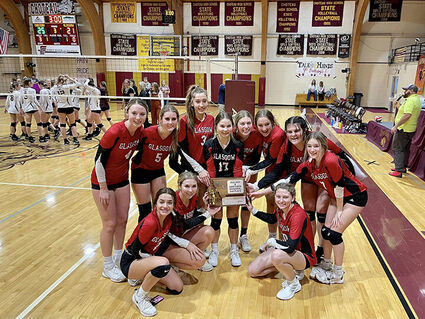 Tori Kaufman / For the Courier

The Glasgow Scottie volleyball squad is making their second consecutive trip to the All-Class State Volleyball tournament – and third trip in four years – after taking second place at the Northern B Divisional Tournament in Choteau this past weekend.

After that, Glasgow faced Malta for the fourth time this season. Their final match of the season put a trip to the state tournament on the line. The Scotties came out on top with another sweep 25-21, 25-20, 25-17. With another win over the M-ettes under their belts, the Scotties moved into the championship match to face Choteau again. The Bulldogs brought out their broom again as the Scotties fell 20-25, 4-25, 21-25.

In their sweep of the Cut Bank Wolves, Glasgow put up five aces, 26 kills, 21 assists, nine blocks and 61 digs.

Tatum Nyquist led in aces with two followed by Daley Aune, Macy Martin and Joely Chappell each with one. Nyquist also led in kills with 26 followed by Piper Johnson and Carly Nelson with six a piece. Ava Lloyd added four kills while Aune and Martin added one each. Aune put up 15 of the team's assists with Martin adding five and Johnson one. Lloyd stopped four of the Wolves' shots and Johnson knocked down three. Aune and Nelson added a blocked shot each. Sammy Tryan had 17 digs in leading the Scotties followed by Nelson, 14; Aune, 10; Nyquist, 8; Martin, 7; Chappell, 3; Johnson, 2, and Lloyd with one.

Fairfield gave Glasgow a run for their money, taking the match to five sets but the Scotties prevailed over the Eagles with three aces, 46 kills, 39 aces, nine blocks and 78 digs.

Glasgow's aces were split evenly between Aune, Tryan and Chappell. Aune led in assists with 36 while Martin added the remaining three. Lloyd let her presence at the net be known with five blocks. Hayden Green stopped three shots and Johnson blocked one. Nelson notched 19 digs followed by Martin with 15 and Nyquist with 14. Aune added nine and Lloyd four while Johnson and Chappell had one each.

Choteau handed Glasgow their first loss of the weekend with a three-set sweep. Glasgow put up one ace, 28 kills, 24 assists, six blocks and 62 digs.

Nelson had the team's only ace. Nyquist had 13 kills. Aune, Lloyd and Johnson put up four a piece and Nelson added three. Aune, whose name may as well be a synonym for assist, put up 20 and Martin added four assists. Lloyd denied the Bulldogs four shots while Green and Nelson had a block each. Martin added 17 digs to the stats sheet followed by Nelson with 16 and Tryan with 12.

The Scotties regained their footing Saturday morning with a sweep of their own, proving their district title over the M-ettes was not a fluke. Glasgow defeated Malta with three aces, 30 assists, 12 blocks and 62 digs.

Chappell had all three of the team's aces. Nelson put up 13 of Glasgow's kills. Nyquist had nine kills while Green added four; Lloyd, 3; Aune, 2, and Johnson, one. Aune had 24 helpers in the win followed by Martin with five and Tryan's one assist. Lloyd blocked five Malta shots followed by Green who knocked down four, Aune with two, and Nelson and Nyquist with one block each. Nelson had 21 kills to lead Glasgow followed by Tryan with 16 and Aune with 12 kills. Nyquist and Martin each added five while Green had two and Chappell one.

The win guaranteed Glasgow a trip to the state tournament – the 16th trip in Scotties history and the 13th time as a Class B competitor – and pitted them in a rematch against the Bulldogs for the trophy. The second match between the two again ended in Choteau's favor. The Scotties had three aces, 22 kills, 19 assists, nine blocks and 42 digs in their final match of the weekend. 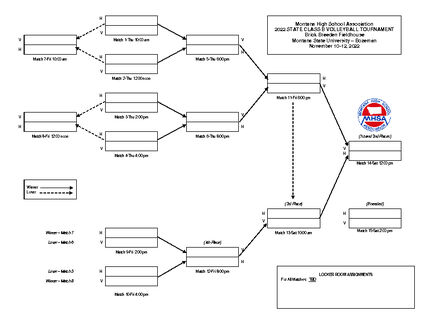 Tryan, Nyquist and Chappell each had one ace. Nelson had nine kills to lead the Scotties while Nyquist added seven. Green and Aune added two each while Lloyd and Johnson notched one a piece. Aune and Martin teamed up for the team's assists with 15 and four, respectively. Nyquist and Johnson each had three blocks while Aune, Nelson and Lloyd added one a piece.

The Scotties head to the All-Class State Volleyball Tournament this Thursday through Saturday, Nov. 10-12, in Bozeman. The tournament will be held at the Brick Breeden Fieldhouse at Montana State University. Glasgow faces defending state champions, the Huntley Project Red Devils, in the opening round at noon on Thursday, Nov. 10. A full tournament bracket can be found on page 5B.