By Compiled by Kirsten Keiser

Sponsored by the Valley County Pioneer Museum and Branch Manager 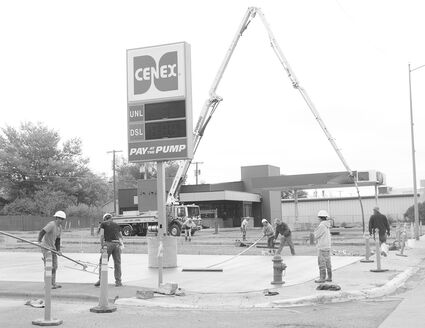 Workers smooth concrete Tuesday at the newly reconstructed Cenex Station and convenience store on U.S. 2, hoping that the predicted rain and wind do not arrive.

A Montana Army National Guard spokesman confirmed Tuesday that two soldiers in the 484th Military Police Co. on duty in Afghanistan were injured on Saturday.

Bruce Peterson and John Fahlgren, as a write-in candidate, ran for Valley County Commissioner, both submitting an introduction to the community in this issue. State candidates also made campaign stops in Glasgow, including Denny Rehberg who was vying for the Senate seat from Democrat Jon Tester and John Walsh, retired adjutant general of Montana, who was shaking hands and talking to folks in downtown Glasgow as he was joining Steve Bullock's Democratic ticket in the governor's race.

It's every coach's intention to get their team to peak just at the right time – to reach the team's potential at the most important stretch of the season. It's safe to say the Glasgow volleyball team is peaking at the right time. The Scottie girls have won six matches in a row as they finish their regular season schedule and head into district tournament.

The Glasgow High School Class of 1938 has announced plans to hold its 60th reunion on June 19-21, 1998, at the Cottonwood Inn in Glasgow. The celebration will coincide with the annual meeting of the GHS Educational Trust, which was established by alumni of the Class of 1938 in 1965.

A $1,048,000 State Revolving Fund loan and a $41,443 Department of Natural Resources and Conservation Renewable Resource Grant to the City of Glasgow will help fund construction of the Southside Stormwater Collection System. The 20-year low interest loan has been made available through the State Revolving Fund Loan Program, a federally subsidized loan program administered by the Montana Department of Natural Resources and Conservation and the Montana Department of Environmental Quality. The grant was awarded through the Renewable Resource Grant and Loan Program.

The Hinsdale School District presented the Gold Apple Award to Eleanor Rosendahl for her dedication to the youth of Hinsdale. Eleanor has accompanied music students on the piano for a number of years at both district and state music festivals. Often, she has volunteered to accompany the high school choir and elementary music groups.

Officials of the Montana Stockgrowers associations were instrumental in getting Montana Fish and Game commissioners to reduce the eastern Montana deer season by a full week this year. Now they admittedly are taking a second look at the idea of charging hunters a fee for the use of their land.

Glasgow's Methodist women had the oldest scrapbooks and minutes of ladies aid meetings on display in heritage hall at Bozeman United Methodist church during the fourth annual session of the Yellowstone conference of the Women's Society of Christian Service, Oct. 3-5. The local church records of women's activities dates back to 1901 and 1902.

Without spending district funds, the local school hot lunch program has been able to hold the cost of lunch ticket to 30 cents while most other schools across the state have raised prices.

A supply of American Defense medals and of World War II Victory medals has been received at Fort Peck. These medals will be issued to all service people and former service people of the Army and Air Force who apply in person at the Fort Peck Administration building.

E.O. Wagner was named the new president of the Tampico Farmers Union local, succeeding Chris Molvig, at the local's meeting in the Tampico hall.

Lorraine Davenport of the Glasgow High School was elected district secretary of the Future Homemakers of America at a meeting at Scobey Saturday.

A notice received from A. A. Klemme of Helena, executive secretary of the Montana milk control board, announced this week that a hearing will be held in the courthouse at 8 the night of Wednesday, Oct. 22, concerning a proposed increase in milk prices here. Request for the increase, along with requests from a number of other areas, was filed at a recent meeting of the board in Helena.