By Charlene Wasson Coach
For the Courier 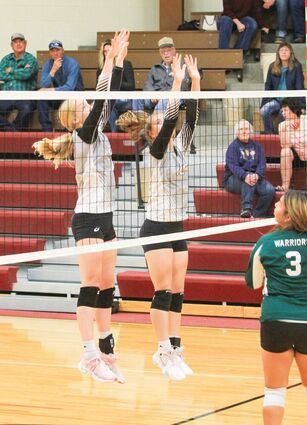 Heidi JOhnson / FOr the Courier

BaiLee McColly (left) and Mattea McColly (right) get up for the block for the North Country Mavericks volleyball team.

We won in three and played everyone.

Friday 10-7 vs Brockton at Hinsdale

We won in three and played everyone.

Aces: Kennedy Simonson 6, Paige Wasson and Kora LaBrie each with 5, Kendall Scheffelmear, Berkley Hillman and Mattea McColly each with 3. 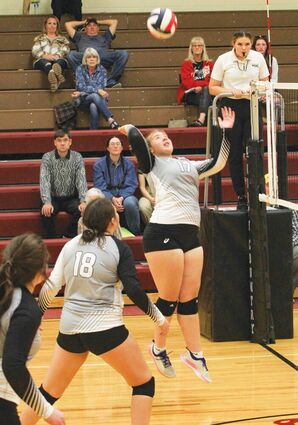 Heidi Johnson / FOr the Courier

Above left: Kodi McColly goes for the spike against Brockton Oct. 7.

These two matches were geared towards staying focused when the play is erratic or slowed down to what we are used to playing. We played our varsity lineups in the first two sets and had our JV lineup take the third set. We worked on some serve-receive lineups we started implementing this week and we really didn't have a chance to play the ball back after we served but we had to be prepared for a quick return. Next week we have three matches in a row Thursday, Oct. 13, at Whitewater vs Harlem, travel to Grenora, N.D., Friday, Oct. 14, to play MonDak. We will spend the night in Culbertson Friday night and then play the Cowgirls at noon Saturday, Oct. 15. We have two weeks left before our district tournament in Plentywood so we are really just working on fixing some very tiny errors and adjusting to get what we would like to use in the post season tournaments.