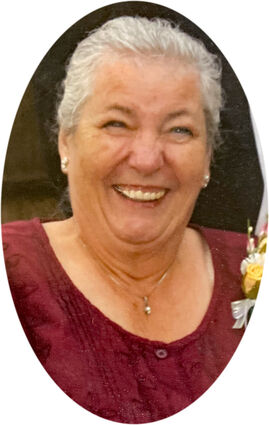 Margaret "Arlene" Fisher gained her angel wings at the age of 81, on Saturday, Oct. 8, 2022, at Valley View Nursing Home in Glasgow, Mont.

A celebration of Arlene's life will be held on her upcoming birthday, Thursday, Nov. 17. Further details to follow soon.

Arlene was born Nov. 17, 1940, in Malta, Mont., to Marie (Bebee) and Urie Coe. Arlene grew up south of Malta at Beauchamp Creek, being such a long distance from school, Arlene and her siblings lived in Malta during the winter months to attend school. Shortly after Arlene started school her family moved into Malta and remained in the community. Arlene received her education from Malta High School and graduated with many friends. Her beauty and kindness for the world radiated everywhere she went and Arlene had a large number of lifelong friends.

Arlene met her soon to be husband after he returned home from his travels beyond the military. Arlene always fondly shared the story of her husband, Tom, pulling up in a fancy car and giving her a ride home, stating it was all over after that. The couple united in marriage on Dec. 16, 1961, in Malta. After marriage Arlene and Thomas settled in Glasgow, until 1963, when they purchased the family ranch south of Saco, Mont. Their daughter Jolene and son Lendall Caldwell were welcomed into their life along with several other foster children whom they loved and cared for. Arlene spent much of her time taking care of her children, and bookkeeping for the family ranch, canning and gathering vegetables from their garden.

Arlene was a loving mother, and grandmother who helped in raising her first granddaughter, Katrena Palmer. Arlene was genuine and welcoming, every guest felt like family when they were at her home. She was a master of quilting, cooking, tuna fish sandwiches and everything fun. Jolene recalls frequently finding humor later in life, about the prom dresses which Arlene use to make for her. Arlene spent much time cooking and sharing stories or recipes with her dear neighbors and family friends along the creek bottom. Arlene was active in American Legion Auxiliary, FFA, and was a leader of the Larb Creek Livewires 4H Club. She spent many of her Saturday's at the Seventh Day Adventist Church in Glasgow, where she would play piano, while Thomas would give sermon and Katrena would sing. She also was a leader and assisted with the Sabbath School Program for that church. Arlene's family was arguably her most important achievement in life and she was so incredibly proud of her children, grandchildren and great grandchildren.

In 2005, Arlene moved to Maxwell, N.M., where she enjoyed the warmer weather and Thomas' fruit trees in the back and the company of her daughter. In 2019 Arlene moved back to Glasgow, where she then got to enjoy the fruits of her labor; spending quality time with her daughter, granddaughters, and great-grandchildren. Her last home was at Valley View Nursing Home, where she loved many, and received excellent care from her Valley View family. Arlene filled her time with crafts, social hours, and playing cards alongside her daughter Jolene.

Those of us who were blessed to be touched by her, understand that her existence and the imprint she left on our hearts exceed the quantity of time that she stayed here. Arlene continues to be a beacon of hope for many and a reminder that leading with kindness, seeking good and having an open heart can have a tremendous impact.

Arlene survived by her brother, Charles "Bing" Coe; daughter Jolene (Edmund) Fisher; son Lendall Cardwell; granddaughters, Katrena (Josh) and DeVon (Cameron); great-grandchildren Sage, Lyndsey, and Jaxson; nephews Mike and Wesley; former son-in-law Kyle Palmer who is the father to Katrena and DeVon, and several of the Fisher relatives from her and Thomas's marriage, and many other neighbors, friends, and acquaintances who were very special to Arlene.