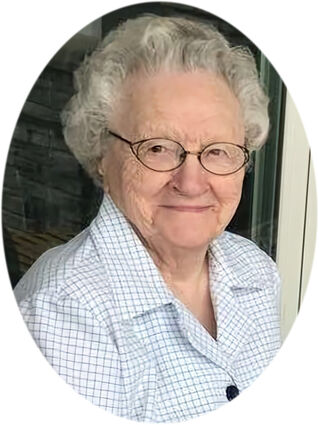 Services are being planned for June of 2023.

Her first three years of schooling were at the South Fuhrman School and then she came to Glasgow and graduated from Glasgow High School in 1941. She entered the Margaret Hoods Beauty College and graduated in July of 1942. So there after Adeline joined the Navy as a WAVE and was stationed in Washington, D.C. When her time in the service was up she came home to help her parents care for her younger sisters.

Adeline was very active in her community. She was known as the "polyester queen." She was a member of the American Legion Auxiliary since 1947. She served in numerous positions and was awarded the Soroptimist Woman of the year of 1975. The Mitchell Group Home was named after her for all of her hours of volunteering in 1993. In 1999, she was chosen for the "First Lady's Award" presented by Teresa Racicot for her continued work with children and youth.

Adeline and Mary Potter worked with The Red Cross for many years in "The Canteen," getting volunteers lined up. She enjoyed raising money for the American Legion Baseball Field along with Elaine Etchart. Over the years she taught bowling to young kids at El-Cor-Del Lanes and was actively involved with Girls State and the Boulder River School for the kids.

She enjoyed watching her grandkids grow up and always supporting them in all of their activities. She and Phil never missed a game.

Some of her favorite things to do were bingo, cards and puzzles.

Memorials in Adeline's name may be made to the donor's choice.