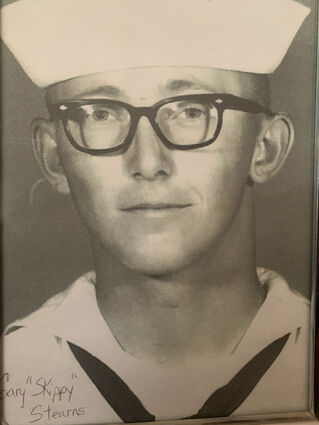 Services will be held on Saturday, July 16, 10 a.m. at Our Redeemer Lutheran Church in Nashua, Mont.

Gary was born to parents, Clinton "Kink" and Frances (Bondy) Stearns, on July 15, 1947, in Glasgow, Mont. Gary was the last of four children.

Gary grew up as a "dam kid" and attended school in Fort Peck, Mont. He graduated from Nashua High School in 1966. Gary joined the United States Navy and served a term of four years. While in the Navy he attended Construction Electrician Class "A" School. During his time in the Navy, he completed a Vietnam tour where he lost many close friends. Gary received a Navy Unit Commendation Ribbon, National Defense Service Medal, Vietnam Service Medal, and a Republic of Vietnam Campaign Medal. He was ranked as a CE3 when he completed his service and left active duty.

After serving his country Gary worked for Duty Construction followed by Montana Power Company (NorthWestern Energy) where he remained for 26 years. After his retirement from NorthWestern Energy in 2003, Gary went on to work at Harlem Lumber until he finally retired for good in 2017.

On Nov. 4, 1967, Gary married Karen Garwood. In 1968 the couple welcomed their first son, Steven, and moved to Lewistown, Mont. Karen and Gary's family grew with the addition of a second son, Scott, in 1971. Gary's career then transferred the family to Billings, Mont. Their family was completed by the birth of their daughter Shari in 1975. Within three years Gary was transferred to Malta, Mont., where they spent 10 years before his final transfer to Harlem where he became Town Manager for the Montana Power Company.

In Gary's younger years he loved spending time at Karen's family's farm in Nashua, at Park Grove, and at the Fort Peck Dredge Cuts where he would hunt, fish, boat, and play horseshoes with family and friends. He enjoyed playing pool, and he and Karen were on a pool league in Malta for many years. Once moving to Harlem, you could often find Gary at the golf course or local watering hole.

Gary is proceeded in death by his wife of 52 years, Karen Stearns; his parents; his brother Milford Stearns; and his sister, Patsy Reimche. His granddaughter, Shenia Stearns, tragically passed away on Jan. 18, 2022.

Gary will be missed by family and friends.